Oh what a night....hanging with a bunch of boys as they gear up for a sugar fest of "homemade cookies" was a blast especially since I was hanging with one of my girlfriend's husbands. Frank Sr is a trip. Reminder to self: always sit with Frank! He is so much fun and has enough energy for all of us.

All the Scout Dens performed a skit or sung. Our Den is lucky enough to have two amazing leaders. One is the more authoritative figure. He keeps the boys in line in a fun, often sarcastic way while the other, is more relaxed, very sweet and easy. It is the perfect balance.

Handsome's Den decided on a skit centered around Santa losing his reindeer and when he fears they were eaten by a polar bear spotted near by, he heads out searching and hoping they are OK. He and his elfs happen upon a house in the woods, There is a ruckus inside, when he knocks the reindeer open the door and shout surprise. They weren't eaten, they were throwing Santa a surprise party....I love how the story came to life with the boys tossing out ideas and they were finally tossed together by one of the Den leaders who is a writer. He showed it to the boys on his iPad

which was pretty cool. All the boys now want one.

Unfortunately, I don't have any pictures of the amazing cookies but I can tell you the homemade only theme went right out the window. There were Entenmann cookies there, plus a bunch of other store bought names.  Nothing against store brought, Entenmanns are some of my favorites but why did I spent 2 hours baking 3 dozen cookies! Ugh!

It was a really good time! 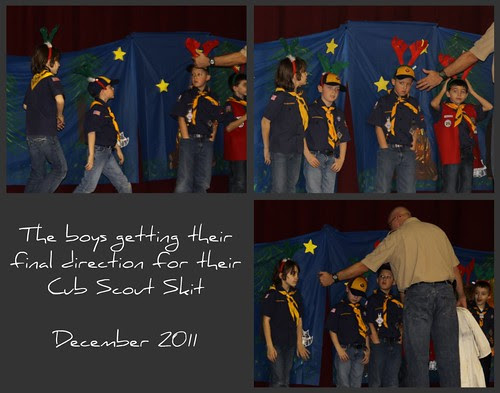 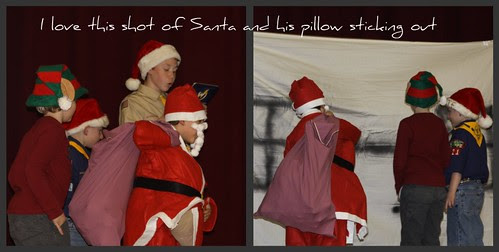 The Reindeer screamed surprise and invited Santa into the party. Handsome looks like he has no idea what he is doing on that stage. Basically he kept hiking his pants up all night. His belt was on but he didn't make it tight enough. Poor kid was also tired. When you get up at 5:30 this is bound to happen.

After the skit the boys received their respective badges! Handsome was thrilled to get one. I wasn't since I had sent over 25 different things I thought for sure he would have quite a few. Asked his Den leader who I had to pay to get my son decorated. He told me he would explain it to me later. I am still waiting. Hey, if I need to grease the palm, I will.

Heading up to get his award. He was thrilled! 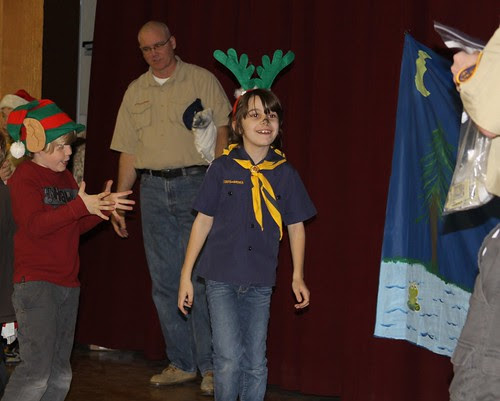 After this, Santa came in with a bag full of Box Derby cars that the boys need to do for January. Umm...have no idea what that is so I will be handing it off to the Teach. I take him to these things, he can do the project! 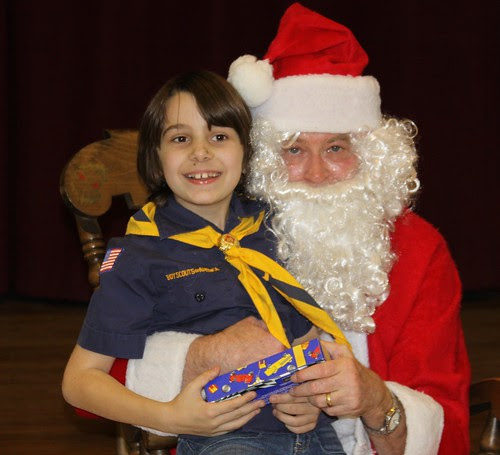