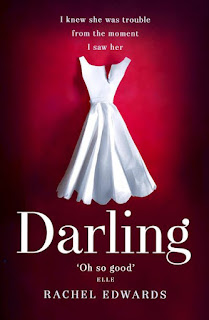 A teenage girl clashes with her new stepmother in this debut thriller with an unforgettable twist
I knew she was trouble from the moment I saw her. I felt it as she stood in the doorway that day: disaster. Not just because she was so different, that skin and that hair, as different from me as it’s possible to be. There was something wrong about her. Wrong for us. It was never going to work.
Now she is dead and only I am left to love him.She is dead, and it’s all my fault

Lola doesn't like that her father Thomas has taken a new wife named Darling especially a black mother with a sick son. This  definitely not someone she expected and Darling wasn't expecting such a spoiled, rude stepdaughter either but they both love the same man so they will have to make it work or will they?

It didn't take long to get into this read. I had to remind myself that I was reading a current and not a period piece focusing on racism and love.

In the end if it a love story but I was confused at times mostly because I wasn't sure why Thomas and Darling had gotten together and wish there was more to the relationship as the book mostly focused on the stories of Lola as the angsty teen and Darling as the "new" adult in the life of a young girl. Was Darling a gold digger? Was Thomas just a lonely man? I don't know because eventually the story became a thriller and while I am into that, I found myself wanting to knock Lola down a few pegs, smack Thomas in the back of the head to get him to open his eyes and scream at Darling for being so mysterious. There is so much more to cover because the book did jump around a lot.

I enjoyed how Lola was written. All choppy and teenage like with hashtags and angst. She is angry and you know it. She is also very calculated and cunning it is a dangerous combination which Darling finds out early on.

All in all the story was decent and a quick read.