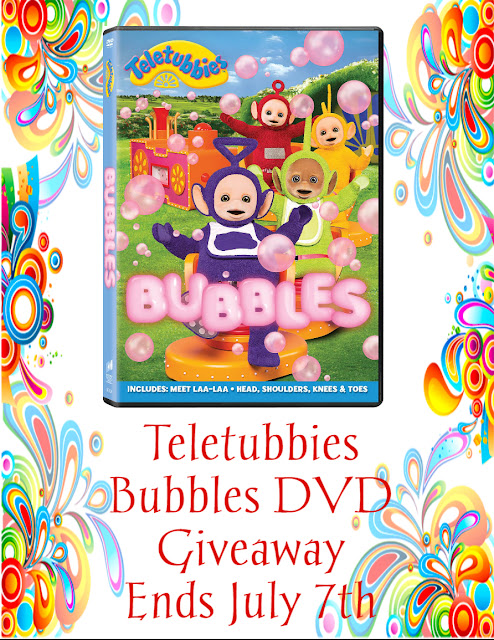 Featuring the Teletubbies Singing “Heads, Shoulders, Knees and Toes” and a Special Featurette with the Lovable Laa-Laa!

CULVER CITY, Calif. (June 5, 2016) – Families everywhere can get ready to sing, dance and splash with the Teletubbies, when TELETUBBIES: BUBBLES arrives on DVD on June 20. Timed perfectly with “International Bath Day” on June 14, the six all-new episodes feature Tinky Winky, Dipsy, Laa-Laa and Po as they sing, dance, play and of course, eat Tubby Custard! TELETUBBIES: BUBBLES includes two all-new engaging featurettes: In the first, fans can join the Teletubbies as they sing the classic song, “Heads, Shoulders, Knees and Toes”; in the second, little ones can learn more about Laa-Laa, the sweet, song and dance-loving yellow Teletubby!

Synopsis:
The Tubby Custard Machine is making lots and lots of Tubby Custard bubbles! Join the Teletubbies as they chase and pop bubbles, play with a magical music box and dance the energetic Tubby Phone Dance. Contains six new episodes, including “Bubbles”.

TELETUBBIES: BUBBLES has a run time of approximately 74 minutes. The collection is not rated.

The 411 by Maria, Handsome and Goddess:

The Teletubbies have been around for 20 years this year and airs on Nick Jr. weekdays at 9:47 am. The new series is designed to help young children develop their physical, emotional, and cognitive skills — in a warm, loving, playful environment.

We used to watch Teletubbies all the time and are so happy it is still around for other kids to watch. What is great about Teletubbies is that they are everything preschoolers love.

Colorful
Repetitious
Use laughter and music to let kids know what is going on.
Easy words and names, hello, bye-bye, uh oh, Tinky-Winky, Poo, LaLa, Dipsy,
Bunnies run around in the background
The Sun is a baby face!
A Narrator to explain things for the Teletubbies

The Teletubbies are gentle, fun loving and caring. Preschoolers love watching things over and over again. At times it is redundant but this is for a 2-3 year old demographic.

To Purchase a copy of the newest DVD

One lucky reader will win a copy of Teletubbies Bubbles
The giveaway is open US Only, ages 18+
The giveaway ends 7/7

DHX Media Ltd. (TSX: DHX.A, DHX.B; NASDAQ: DHXM) is a leading children’s content and brands company, recognized globally for such high-profile properties as Teletubbies, Yo Gabba Gabba!, Caillou, Inspector Gadget, and the acclaimed Degrassi franchise. The Company is a leading producer of children’s shows and owns the world’s largest independent library of children’s content, at more than 12,500 half-hours. It licenses its content to broadcasters and streaming services worldwide and generates royalties through its robust global consumer products program. Through its subsidiary, WildBrain, DHX Media operates one of the largest networks of children’s channels on YouTube. Headquartered in Canada, DHX Media has 17 offices worldwide. On May 10, 2017, DHX Media announced it had signed definitive agreements to acquire 80% of the famed Peanuts brand and 100% of the Strawberry Shortcake brand, which transactions are expected to close on or around June 30, 2017. Visit us at www.dhxmedia.com.

Disclaimer: No monetary compensation was offered or received.  I did receive a DVD for my opinion.  All opinions are my own.