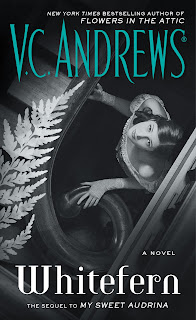 TO PURCHASE
(Book #2 of The Audrina Series)


The long-awaited sequel to My Sweet Audrina, one of V.C. Andrews’s strangest, most beloved books—and now a Lifetime movie! Whitefern swallowed Audrina’s childhood—and now the sprawling Victorian mansion threatens her adult life too...

Audrina remembers a better time, when her husband, Arden, was a young man with a heart filled with devotion for her. He didn’t used to be this ambitious, expansive...this cruel. But then, the death of Audrina’s father changed a great many things.

When the reading of her father’s will reveals that Audrina herself will control fifty-one percent of the family brokerage—the halls of Whitefern again don’t feel safe. Arden’s protestations become frantic, nearly violent. And while Audrina didn’t anticipate running the family business, she’s curious to do so. And she can’t help but wonder what had made her father change his will at the last minute? What did he know about Arden that she didn’t?

Trapped in the middle of it all: her fragile, simple sister—the beautiful, trusting Sylvia. Audrina promised her father she’d watch over the young woman. But after years of relative quiet, the dark days of Whitefern may have returned...
The 411 by Maria:
Ghostwriter for V.C. Andrews book 2 of the My Sweet Audrina Series finishes up the story of Audrina and her beautiful sister Sylvia in true VC Andrews fashion with Death, Deception and Devotion. Although TRUE Diehard VC Andrews fans do not love the book I think it is fine if you don't read too much into it. Yes, there are many inconsistencies from the first especially with Sylvia and forget Arden. How could a man change so much? UGH..and although I was able to figure out the ending less than midway through the book, it definitely kept my attention.  Audrina's love for her father and sister, her trust in the people around her at times made me want to scream open your eyes Audrina but alas the horrors of Whitefern would eventually free her of her current prison. I would love to read a new book with Audrina running her father's company with a new awareness of the many deceptions and the webs people will weave for their own gain but I know it will only be in my head as this was the last one of the series.