Lessons For The Future Have To Happen Now

Monday morning I dropped my 11 year old Goddess off at the bus for a two night/three day school trip. I did not want to send her but she begged. All her friends were going, all her friends told me they would take care of her and I found out which teachers were going on the trip and felt comfortable so I sent her. I know these things are great for her and also know she will create memories to last her a lifetime but in my head I want my baby with me.  So, like any good mom I let her go, I can't hold her too tight or she will flee the nest the moment she can. Allowing our children to grow up isn't easy for some of us.

At the bus there were people like me, there were also people who were like BYE...can't believe it is only two nights and then there are a bunch of the middle ground. I found Goddess' friends, we put her bag on the bus. I took some photos and with these three it is difficult. None of them want to pose for a camera. I basically stand there shouting out all three names and shoot hoping for at least one. My now 11 year old is very much the tween and has no time for this.


I adore their awkwardness. They are adorable. She was loving the fact she is going with her friends. She is a very independent girl. HOWEVER....

When she returns she will be grounded. Not because she went on a school trip but because she didn't follow the instructions her parents set forth before she left.

The kids were told they could call home using their cells between the hours of 4:30 - 5:15. It was the first day and while she doesn't have a phone I am friends with the teachers who were on the trip. She was asked if she wanted to call home and said, "my mom is working."  Hmm...the kid has zero concept of time. She doesn't know 4:30 means we would all be home. I get out at 2 and pick her up from school at 2:30 but at 11 she still has no idea how time works.  The teacher was sweet enough to send me a photo of the girls after they had showered waiting to go to dinner 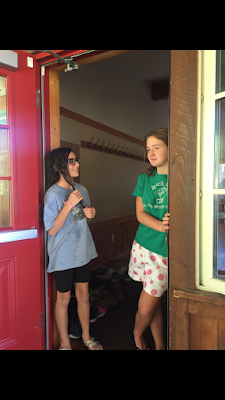 and I mentioned how upset I was that I hadn't heard from her which is when I got that story. She told me that she would have her call about 8:15ish when they were done with some activity. Sounded great. Her dad was annoyed she hadn't called and said this shows lack of responsibility and she would not be going on another trip.

SO.....8:15 comes, 8:30 I get a sweet text from the teacher who said, "Sorry, she doesn't want to call, she is having fun with her friends and I will have her call tomorrow." I thanked the teacher but in my head I thought, What!? Goddess was too busy to call home? Her father was annoyed, I was  pissed!!! We paid $279 for her to go to this trip but there were rules and she has no time for a few moments to tell us she is OK?! Well...I never!

She did call last night. She doesn't do go phone. It was a horrible call. I couldn't get through to her. She was ignoring everything saying she couldn't hear me but the teacher told me she could hear me fine. Most of the time it was me screaming her name and saying HELLO! UGH!

Anyway...when she gets home, after she tells me how much fun she had, I will inform her that she is grounded until Monday and that she will not be going on another overnight never mind two nights anytime soon. This lesson is not for my 11 year old Goddess, it is for my 18+ Goddess who will eventually be borrowing the car and needs to learn when Mom and Dad say you are to call home we mean it.  These lessons need to happen now NOT when she is 18!