Transformers: Age of Extinction Coming Out This Friday-Big Red Soda's Viral Video Pumps Up Fans For the Premiere


One of a Kind Taste Collides with Michael Bay’s Transformers: Age of Extinction and Big Red Soda Partnership

Fans Can Win $25,000 in Transformer’s Prizes and Collect a Limited Edition Can Series Featuring Their Favorite Transformers Characters

(AUSTIN, TX) - Autobots and Decepticons aren’t the only things creating excitement for Michael Bay’s global blockbuster franchise this summer! Thanks to Big Red, America’s original and bestselling red soda, TRANSFORMERS fans will have the opportunity starting May 19th to bring home some of the highly anticipated characters from TRANSFORMERS: AGE OF EXTINCTION. 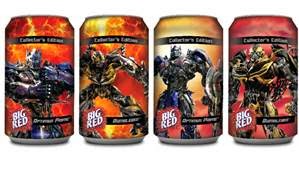 It is as simple as picking up a 12-pack of Big Red, which includes Limited Edition TRANSFORMERS themed cans. The series of six cans will feature updated renderings of iconic TRANSFORMERS figures Optimus Prime and Bumblebee. Fans will even be able to pick their side by choosing between Autobot and Decepticon themed cans, found only on Big Red Zero, the soda with same delicious Big Red flavor and zero calories.

“Just as we see with Big Red enthusiasts, TRANSFORMERS fans all have a passion of epic proportions for the franchise. This is our opportunity to offer everyone a chance to receive something ‘Deliciously Different’ in anticipation of one of the biggest films of the summer,” says Thomas Oh, Big Red’s SVP of marketing. “We are thrilled to be part of bringing the explosive on-screen action of TRANSFORMERS to life with not only our Limited Edition TRANSFORMERS can series but also a sweepstakes offering fans the chance to win some unique TRANSFORMERS prizes.”

“This national Big Red campaign is a great way to ramp up further excitement for the upcoming release of the film,” says LeeAnne Stables, Executive Vice President of Worldwide Marketing Partnerships for Paramount Pictures. “Now Big Red fans of the franchise can get set for the movie with TRANSFORMERS: AGE OF EXTINCTION collectible cans and cool movie themed prizes.”

Fans can stock up on their TRANSFORMERS swag with Big Red’s $25,000 sweepstakes*. Up for grabs will be TRANSFORMERS collectable figures, Hasbro toys inspired by the movie, wearables, DVDs, posters and even a rather chilling prize, a cooler that transforms into a picnic table. All in all, Big Red will be giving away over nine hundred prizes sure to excite all levels of devotees. Check out the entire lineup at bigred.com/tf4.

*NO PURCHASE NECESSARY TO ENTER OR WIN. A PURCHASE WILL NOT INCREASE YOUR CHANCES OF WINNING. Sweepstakes begins 1:00 am CST 5/19/14. Ends 8/15/14. Open to legal residents of any U.S. state or DC who are at least 18 & up. SUBJECT TO OFFICIAL RULES located at bigred.com/tf4-privacy. Odds of winning depend upon the number of eligible entries received. Sponsor: Big Red Inc., 4500 River Place Blvd., Bldg 1 Suite 450, Austin TX 78730.

ABOUT TRANSFORMERS: AGE OF EXTINCTION
“TRANSFORMERS: AGE OF EXTINCTION” is the fourth film in director Michael Bay’s global blockbuster franchise. Mark Wahlberg, Stanley Tucci, Li Bingbing , Kelsey Grammer, Sophia Myles, T. J. Miller, Nicola Peltz, Jack Reynor and Titus Welliver star. The film begins after an epic battle that left a great city torn, but with the world saved. As humanity picks up the pieces, a shadowy group reveals itself in an attempt to control the direction of history… while an ancient, powerful new menace sets Earth in its crosshairs. With help from a new cast of humans, Optimus Prime (voiced by Peter Cullen) and the Autobots rise to meet their most fearsome challenge yet. In an incredible adventure, they are swept up in a war of good and evil, ultimately leading to a climactic battle across the world.