The Museum of Forgotten Memories by Anstey Harris 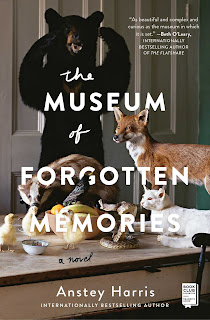 At Hatters Museum of the Wide Wide World, where the animals never age but time takes its toll, one woman must find the courage to overcome the greatest loss of her life—from the author of Goodbye, Paris.Cate thought she’d met her match in Simon at university—until she laid eyes on his best friend, Richard. Cate and Richard felt an immediate and undeniable spark, but Richard also felt the weight of the world more deeply than most. As the three matured, he receded further and further into darkness until he disappeared altogether.Now, four years after Richard’s passing, Cate is let go from her teaching job and can’t pay the rent on the London flat she shares with her and Richard’s son, Leo. She packs the two of them up and ventures to Richard’s grandfather’s old Victorian museum in the small town of Crouch-on-Sea, where the dusty staff quarters await her. Despite growing pains and a grouchy caretaker, Cate falls in love with the quirky taxidermy exhibits and sprawling grounds and makes it her mission to revive them. When the museum is faced with closure because of a lack of visitors, Cate stages a grand reopening, but threats from both inside and outside the museum derail her plans and send her spiraling into self-doubt.As Cate becomes more invested in Hatters, she must finally confront the reality of Richard’s death—and the role she played in it—in order to reimagine her future. Perfect for fans of Evvie Drake Starts Over, The Museum of Forgotten Memories masterfully weaves life with death, past with present, and grief with hope.

It took me a little longer to read this than I thought it would when I first got it. I was really into for the first four chapters. It slowed a bit in the middle but then picked up again. It was really an enjoyable read. Well written with likeable characters and a great storyline.

Our main character Cate has moved to her late husband's family home a sprawling museum that is also one of the main characters in this book. Her and her son Leo must start over again while dealing with the loss of the man in their lives as get their lives back in order.

Cate's husband's suicide has taken its toll and Cate is lost, shot and feels the weight of the world on her shoulders until she finds something and someone to help her heal and deal.

The prose is really beautiful and descriptive. Deep, meaningful and lovely to read out loud. I enjoyed the story very much once I realized this wasn't going to be a book I could get through quickly to move onto the next book. I needed to savor it and not only read it be see it! The words longed to be tasted and when I wasn't re-reading beautiful paragraphs I was enjoying the character of Leo. Cate's son's disability is well written.  As the mother of a son with a disability I found myself wondering if I treat my son like Cate treats Leo. Do I allow him to make his own decisions enough? Do I believe he can take care of himself if he had to? Could he take care of me if necessary as Leo did for Cate? Sometimes we need another person to tell us to take a step back and I appreciated Patch opening Cate's eyes when necessary.

All in all it was a great read by wonderful writer never becoming dark, cheesy or too deep.

Disclaimer: I received a complimentary product for my own review. No monetary compensation was offered for this review.