Have You Ever Wondered Does Size Matter? Check Out Bigger Like Me For The Answers - Extended Director's Cut Review 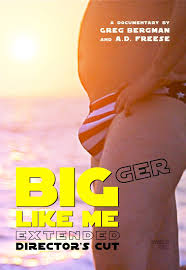 Originally released as BIG LIKE ME, the film received praise for its deep dive into Bergman's journey of enhancement and personal discovery. The LA Weekly described the film as "an entertaining, awkward look at obsession and perfection" (LA Weekly) that "dabbles in parody, psychology and philosophy...is alternatively fascinating and disgusting" (The Huffington Post).

"Bigger, bolder and even crazier than the original version, "Bigger Like Me" (the extended edition) is the story I always wanted to tell", said Bergman. "I am so pleased to be working with Breaking Glass Pictures in releasing this film across North America."

This extended director's cut of Big Like Me expands the story of comedian Greg Bergman's obsessive quest to enlarge his penis. After failed experiments using pills, pumps, and other so-called methods, Bergman travels to a surgeon in Tijuana, Mexico, where he risks everything (including his marriage) to fulfill what he sees as his destiny. There is no room for small men in this hysterical and disturbing look at one man's dark, funny descent into phallocentric delirium.

"This is the hilariously expanded version of Greg Bergman's limited release documentary BIG LIKE ME about his obsession to enlarge his penis", said Richard Ross. "When pills and pumps don't work, he heads to Mexico to go "under the knife" in one of the most graphic and harrowing operations that you'll never be able to un-see!"

Soooooo I was kinda interested in seeing this documentary because it hasn't really been done before. Sure woman can do all kinds of things to their bodies to get the effect they want. They inject their lips, color their hair, enlarge their breasts, even fix their vajayjay to be tighter but men enlarging their uhhh member. Nah man, I haven't see a doc on that so...I sat down while home with a sciatica issue and the kids in school and thought...WTH?! Then I sat back and started thinking; wait, I also would never get my boobs enlarged, I don't believe in cosmetic surgery but what if I went through my whole life hating something about myself so much that I could actually do something about it. When Greg said he had thought of killing himself once over his "size" I got it. It is a bold movie. Greg doesn't leave much to the imagination.

We watch Greg try different methods, often enlisting the help of his very bored wife to measure him
afterward. My favorite scenes are when Greg heads to the street to ask random people what size they like and shows them three different sized phallic pieces.

The documentary also includes moments of Greg's stand up act and his family as he talks to them about his desire to have a procedure to enlarge his penis.

I am not sure if size matters to all woman but it matters to Greg and he heads over to Mexico to get injections for a more pronounced girth and we sorta see him try things out when he gets the chance but more than the boldness is the reminder that people are looking for perfection in their lives and some will actually travel and allow a doctor to inject stuff into their junk! Sooooo I guess I am glad I saw it and I base whether a movie is good or bad on whether I talk about it with others. I found myself mentioning the movie to a few people for a week so I guess that makes it worth a look. If nothing else, you can see what one man will go through in order to find happiness in his pants.