I spent all of last night with an intense case of Mommy guilt. Yesterday I went to a friend's house for lunch. The kids had a good time playing and my son was in his glory with new toys to play with and new people to watch. At 2:00 pm I decided to hit the road for my long ride with my colicky daughter and because my son was in need of a nap which usually happens at 11:30 a.m. When I chased him down to put his sneakers on he threw a fit like I had never seen. I had to wrestle him to get him ready to go and have the rubber burns on my forearms from his sneakers kicking at me to prove it. Feeling as though he was overtired even though I had never seen this reaction before; I stood up triumphantly knowing I had won the battle leaving him screaming and crying on the carpet and YES his sneakers were on. I remember thinking that everyone must think he is always so out of control so I said something to the effect of "wow he must really be overtired and doesn't want to leave". He yelled and kicked as I carried him down the stairs to the car. I seat belted him into his car seat and thought how crazy he was acting. I had never witnessed anything like this. Although he usually protests he usually gives up when he realizes that it is a losing battle. As I stepped into the drivers seat I glanced into my mirror and watched in wonder as my son threw himself around while strapped into the seat. All I saw was arms and legs thrashing around along with his screaming, horse voice. I remember rolling down my window saying goodbye and telling JP he was losing his voice from screaming. He carried on for about 10 minutes before drifting off.

When I got home and opened my daughter's door to carry her into the house, my son woke and started crying. I told him I would be right back. He never cries because he knows that I carry her first and then I go get him. I was surprised but figured it had something to do with him being tired. I went out to get him and my daughter started screaming (of course), as I walked him inside, I lied him down to change his diaper. I pulled down his shorts and noticed huge, ugly, red welts up and down his thighs. They were raised almost 1/2 inch. I put Cortisone on his legs and gave him a dose of Benedryl. All the while my daughter's screams have escalated to the unnerving sounds of cats being slaughtered. 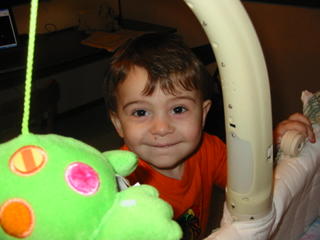 Later I called my friend's house to see if her cleaning lady (who had just been there that morning) used carpet powder because while I don't know if my son is allergic, what causes his ezcema is still mostly a mystery to us. She said no because her daughter also has allergies so her cleaning lady doesn't use powder. Then she asked if my son had eaten any cookies. I told her yes that he had three bites. She said, "They were peanut butter!" OMG his allergist had told us that he had a slight allergy to peanuts but that I didn't have to worry about checking every label. She said if peanuts weren't one of the first three ingrediants all would be ok. I think she is wrong. I think his allergy is worse then she thought. Three little bites of a cookie!? Now I know that his thrashing, kicking, screaming, crying and horse voice were not part of a typical toddler tandrum but an allergic reaction to peanuts. He was uncomfortable, scared and probably itchy all over including his throat which is probably why he sounded so funny. For all I know his throat was closing up and making it hard for him to breath. I was so busy being annoyed by what I thought was a crazy tandrum that I didn't even think he could be uncomfortable.

As moms, we know our kids better than anyone. I had never seen this reaction because we had to leave or being tired yet I chaulked it up to that. The whole time I kept thinking, this is not normal for him. So why did I not think further than a tantrum. Thank God nothing happened to him! I would have taken that guilt to my grave.

What I learned; never give him nuts and always trust my instincts. I knew this was not normal behavior for him so I should have investigated his actions further.