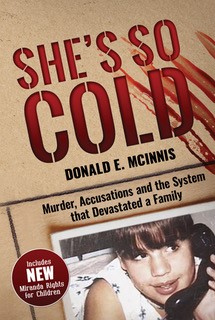 She's So Cold: Murder, Accusations and the System that Devastated a Family (June 2019; https://donaldmcinnis.com) — a gripping true story of California’s Crowe Murder Case.

When 12-year-old Stephanie Crowe was found stabbed to death on her bedroom floor on Jan. 21, 1998, the Crowe family’s nightmare had only just begun. In the weeks to follow, her brother, then 14, and two of his friends were charged with her brutal murder. Two of the boys confessed following hours of psychological manipulation.

Follow the court room proceedings as criminal defense attorney Donald McInnis exposes the police tactics that produced the false confessions, including lies about the existence of evidence and the abusive use of a computerized truth verification test.

You don’t think this could happen to your child? Neither did the three families whose lives were devastated.

To help protect children from abusive police tactics and prevent further miscarriages of justice, She's So Cold offers new Miranda rights warnings, modified so children can understand them, and a Children’s Bill of Rights for minors being investigated by the authorities.

WOW! Wow! Wow! This book took me 2 weeks to read and I was never so angry. So unjust. Such a piss me off. Not because of the writing or because the book was a disappointment. Completely the opposite. The tactics used by law enforcement and attorneys to get a conviction can devastate a family and I pray many read this. We should all know our rights although hopefully we will never be in a situation like this it is good to be aware.

This murder mystery is fact! It happened. A young girl was murdered in her own home. 3 boys were questioned including her own brother. Families were split up and torn apart, friendships questioned and the boys were left to question their own saneness. All of this to close a case in what law officials thought was an open and shut case.

Without giving too much away the book is fascinating. Reading the questioning chapters angered me and made me feel so sorry for the boys who are so young themselves.

If you enjoy mysteries you will love this. If you want to see why we need more people like Donald McInnis working for us, you will enjoy this.

Thankfully the book doesn't spend much time on the devastating loss of the young girl and focuses on the boys or this would have been a harder read. Mr. McInnis does a wonderful job of laying out the facts without prejudice. He simply states what happened.