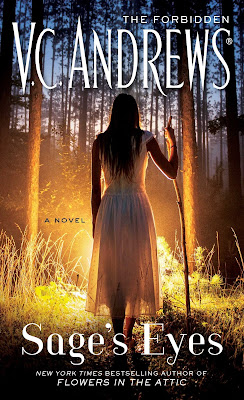 From V.C. Andrews, comes the tale of a young girl kept under the watchful eye of her adoptive parents, as if they fear who—or what—she’ll become…

Sixteen-year-old Sage is a lonely child. Her adoptive parents watch her obsessively, as if studying her for warning signs of…something. And maybe they’re right to—even she can’t make sense of the strange things she sees and hears. She possesses knowledge that other teenagers don’t, that her parents and teachers—no adult—could possibly have. So when Sage finally makes a friend who understands her alarming gift, he becomes her confidant, a precarious link to the truth about who she really is. For Sage and the alluring new boy at school share many things in common. Perhaps, they’ll learn, far too many things.


In Sage's Eyes we meet 16 year old Sage and adopted only child one who has an apparent gift of seeing and knowing things that will happen or have happened. She has dreams and feelings that her parents want her to ignore and forgot.  Adopted at 8 months old she has many questions about her past and is confused by her parents constant guard and grilling questions over everything she says and does. It must be confusing for a young girl who has never had reason for them to be so untrusting.  Odd gifts and trinkets, overbearing parents and interesting but elusive relatives have made Sage's life lonely and make her feel awkward let alone moving to a new school.

Life is complicated just when Sage starts stretching her teenage wings a new handsome student named Summer enters her life. Oddly enough he understands her gifts and even has a few of his own. In the end we learn a few things. Not many.. and they are oddly placed. It just seemed like a big build up and then a weird Wiccan story to explain her past and then nothing.  I am not sure there is a part 2 and I will be OK with that.

As a huge VC Andrews fan of the past I found it interesting that books are still being put out after her death by ghost writers.   I am fine with the families continued use of her name (they have every right) and the hiring of Andrew Neiderman to write in this well documented blueprint set forth by Andrews many many years ago however it takes more than a blueprint to write with the same passion for the characters that Andrews did. When you read a VC Andrews book you became family with the characters they were with you long after the sage was over and many of us re-read and re-read again our favorite VC Andrews books. Sage's Eyes may not be one of them.