My family is a huge fan of Blue Orange games. We've reviewed Wuzzits, Tell Fairy Tales, Spot it Disney/Pixar and Spot It and still play every one of these games. 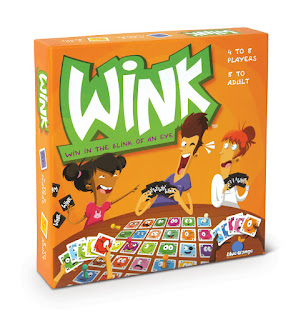 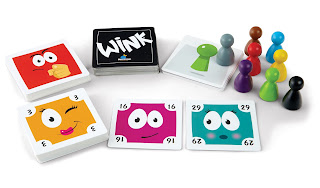 When I first received it I was eager to jump in but after reading the directions I was lost. SO...I put it aside for a few days until today when my college educated niece stopped by. She is amazing and sat to read the directions. Together we re-read them for a third time and decided to jump in. I am not sure if we were both over thinking it or if the directions made things seem complicated but I must admit when we first sat down, we weren't 100% certain we got it all!

My daughter went first and by the time we were around to me (the 4th player) we understood it. It isn't complicated at all. A little weird but I can't wait to play with a bigger crowd.

There are two sets of cards. Both are the same except one is a black set and the other a white set. We put one of the sets down in a 6 x 6 pattern. 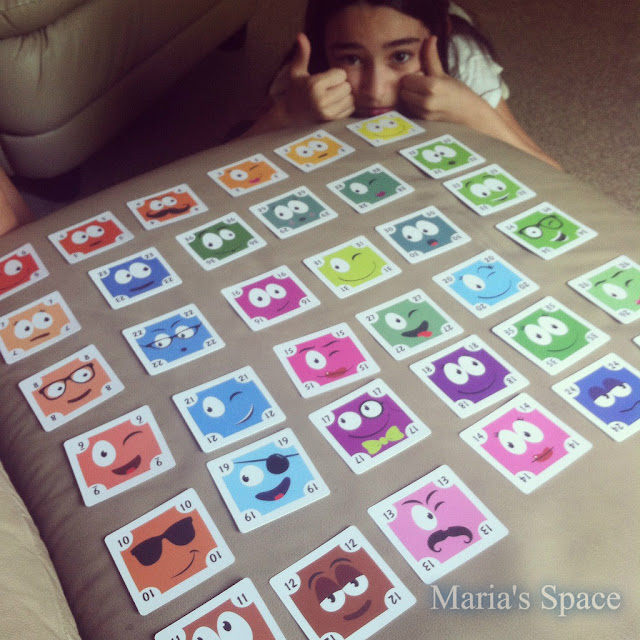 Next you hand out 7 cards to each person of the second set. Everyone gets a game piece and a card to match the color of your piece.

You also get 4 accuse cards. This was one of the things we were unsure of at first. We got it and used them wisely but they confused us at first.

Here is Handsome listening to the rules for the 10th time. 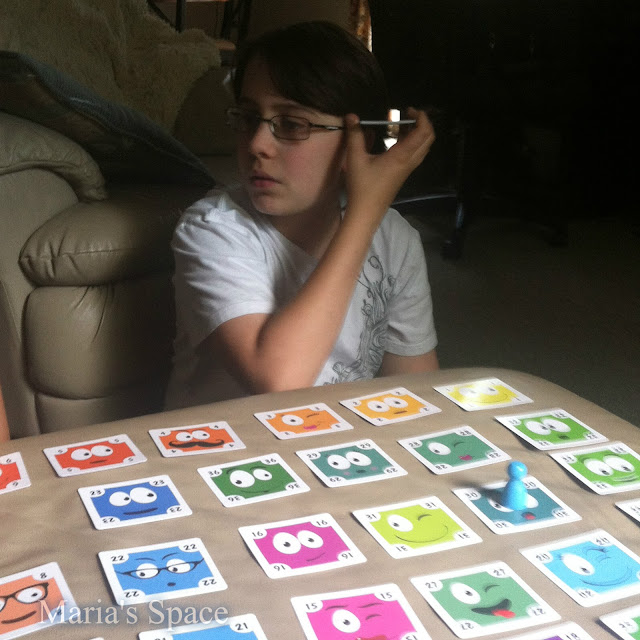 OK...the first player takes there playing piece and put it on a card that does not match one of the 7 cards that is in their hand. They announce the card they are looking for. Now there is where hopefully they catch the eye of the person who has the card (their partner in this round)  without someone else catching that eye contact because they can then throw an accuse card in. Once everyone has put their piece on a card and announced who they are looking for, we go back to the first player who states who they believe has their card. If it is a match they both put the card under the card that is the color of their game piece next to them. With me so far? Yeah, it takes some time!

If someone sees the contact they can throw in the accuse card and if correct in their accusation get the card which will be used as a point for them in the end.

It was fun. We laughed. The hardest part is playing with someone like my son who loses focus and didn't stay with the game, doesn't wink at the person who is looking for the card thus having someone lost the point they may have received if he stayed focused.

I can't wait for the opportunity to play with a larger crowd. I was surprised with how such a small box turned into such a big game and I think with a crowd this could be really fun. My niece and I think this is a great game for a larger group, older than 10. We also think this would be a great way for a teacher to start the school year with a new class. A great way to break the ice as the game states. You never know, all that winking could start something fun and exciting.

Disclaimer: I received a complimentary game for my honest opinion. No monetary compensation was offered or received.