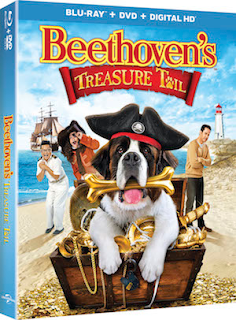 Get ready to howl with laughter in this all-new family comedy starring America's favorite St. Bernard, the one and only Beethoven! After a doggone disaster of a movie shoot, the big-hearted pooch and his trainer, Eddie (Jonathan Silverman, Beethoven's Big Break), are heading home when they get stranded in a small coastal village. When Beethoven befriends a local boy (Bretton Manley, Ted), he helps him find a pirate map to lost treasure and together they em-bark on an adventure that brings the whole town together. Co-starring Morgan Fairchild (Flamingo Road), Kristy Swanson (Buffy the Vampire Slayer), and Jeffrey Combs (Re-Animator), it's a heartwarming "tail" about finding fun wherever your nose leads you.

Beethoven and his trainer Eddie end up in O'Malley's Cove where they meet a young boy and his mother. The boy has a dream to find the treasure his father told him about before he passed away.

What I love most about this movie is how Beethoven says so much without uttering a single word. His face shows such emotion.

I enjoyed the moments of Beethoven and Sam as they ventured out together. Beethoven either passing gas in Sam's face or saving his life. I'd say that makes for some laughs. Kids will appreciate the little Indiana Jones type moments as Sam heads into a spider web filled cave and ends up with a large spider on him.

The moral of this story is never give up your dreams and you never know where you will meet your next best friend.