At the end of last month I was driving by a house and noticed a red and black punching bag. It wasn't hard to spot. That red stood out like a ...well red punching bag amidst all the browns and greys of the area during this season.

The next day, I noticed it again. By day three, I thought...if that bag is still there tomorrow I am going to pick it up. It is obviously garbage sitting curbside for so many days.

I was driving back from somewhere with the kids and Handsome was pouting in the backseat about something, probably having to leave the house. He is a homebody because he wants to play his precious Xbox 360 and Wii. "Oh well, get over and let's go, there will be plenty of time to play later" I am always telling him and noticed it again as I passed it. Damn, there it is... looking behind me and seeing no one I put on the breaks. Threw the car into reverse and backed up. Got out and inspected said piece of garbage. It was in mint condition. Not a mark, stain, tear on it. The base was still filled with water but I managed to hall it into my little car and drove it home. 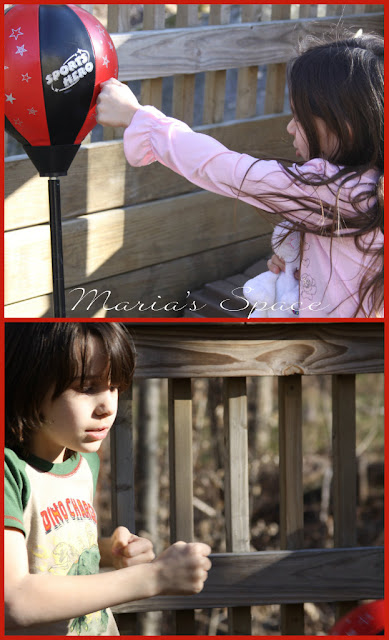 They play with it every time we go on the deck and when the time comes to get rid of it. I will have no guilt putting it curbside for another family.  Until then the kids can enjoy some fun outside where they need to get fresh air and sunshine.

Email ThisBlogThis!Share to TwitterShare to FacebookShare to Pinterest
Labels: goddess and handsome