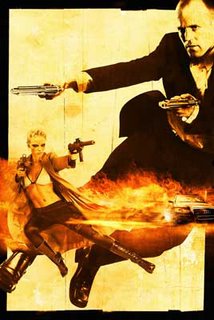 Last night my husband and I rented Transporter 2. Truly there are only a few reasons to see this movie:

1- Jason Statham - He is hot, hot, hot.
2- Really cool driving scenes.
3- Jason Statham - Oh wait, I already said that!
4- Awesome fight scenes. I was like a school girl, giggling each time he skillfully, and unbelievably kicked ass.
5- For the guys - There is a skanky chick Lola, who wears lingerie, carries big guns and is constantly sticking her tongue out of her mouth. 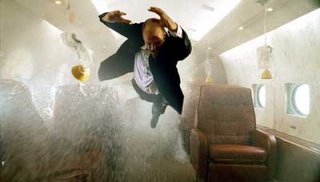 Basically Transporter is a guy movie but my husband basically worked on the laptop while I watched. Jason plays ex-Special Forces agent Frank Martin. Frank is retired and lives in Florida driving a rich couples little boy. The boy is kidnapped and Frank must take down the kidnappers, save the boy and stop a virus that the kidnappers are spreading.

Despite some flaws in the story line and over the top effects; especially a fight scene that takes place in a plane where the pilot has been shot. The Plane is spinning out of control but the fight still goes on even though they should be bouncing off the walls, ceiling and floor of the plane. Transporter 2 was entertaining because of the over the top effects!