BINGE WORTHY - THE UNDOING on BLU-RAY AND DVD

“A seductive mystery…your next HBO obsession”

Based on The New York Times Bestselling Novel 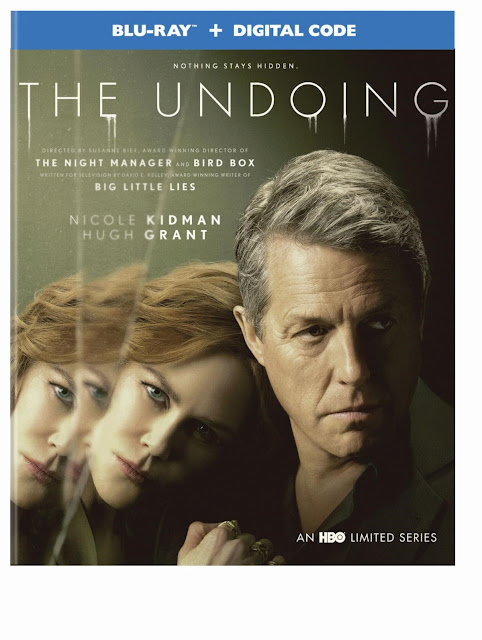 Unravel the Mystery on Blu-rayTM and DVD

BURBANK, CA  Nothing stays hidden! From Emmy®, Academy Award and Golden Globe-winning director Susanne Bier (“The Night Manager”, Bird Box) and the Emmy® -winning creator of “Big Little Lies,” David E. Kelley and starring Emmy®, Academy Award and Golden Globe-winner Nicole Kidman (HBO’s “Big Little Lies”) and Emmy® nominee and Golden Globe and BAFTA Award winner Hugh Grant (“A Very English Scandal”), comes the highly anticipated six-part limited series, THE UNDOING: AN HBO LIMITED SERIES from Warner Bros. Home Entertainment on Blu-ray and DVD March 23, 2021. Making HBO history as the first Original Series to grow viewership consistently week after week over the course of its season, the thriller will have you on the edge of your seat from start to finish with all six gripping episodes from the fantastic limited series, plus three bonus features including one where the longtime friends and co-stars discuss working together for the first time. THE UNDOING: AN HBO LIMITED SERIES is priced to own at $24.98 SRP ($29.98 in Canada) for the DVD and $29.98 SRP ($39.99 in Canada) for the Blu-ray which includes a Digital Copy (US Only).  THE UNDOING: AN HBO LIMITED SERIES is also available to own on Digital via purchase from all major digital retailers

THE UNDOING: AN HBO LIMITED SERIES follows Grace (Kidman) and Jonathan Fraser (Grant), who are living the only lives they ever wanted for themselves. Overnight, a chasm opens in their lives: a violent death and a chain of terrible revelations. Left behind in the wake of a spreading and very public disaster and horrified by the ways in which she has failed to heed her own advice, Grace must dismantle one life and create another for her child and her family.

THE UNDOING: AN HBO LIMITED SERIES is directed by Susanne Bier and is created and written for television by David E. Kelley, who also serves as showrunner; executive produced by Susanne Bier, David E. Kelley through David E. Kelley Productions, Nicole Kidman and Per Saari through Blossom Films, Bruna Papandrea through Made Up Stories, Stephen Garrett and Celia Costas. The limited series is based on the 2014 novel, “You Should Have Known” by Jean Hanff Korelitz.

Honestly, I do not binge watch anything. I just can't commit like that. I watch many many things alone or with various members of my family. This was one of those shows I watched alone for the purpose of the review but ended up loving it and binged it in one week between work, school and life.

It stars Nicole Kidman and Hugh Grant which on the surfaces seems like a strange pairing but it was perfect!

Was it the best thing I ever saw no! It was exactly what I needed. Something to dive into that didn't bore me and wasn't on as background noise as I did something else like cleaning, laundry, dishes or school work which is usually what happens. I looked forward to the show!

The Undoing is now available to own on Digital. Digital purchase allows consumers to instantly stream and download to watch anywhere and anytime on their favorite devices. Digital movies and TV shows are available from various digital retailers including Amazon Video, iTunes, Google Play, Vudu and others. A Digital Copy is also included with the purchase of specially marked Blu-ray discs for redemption and cloud storage.