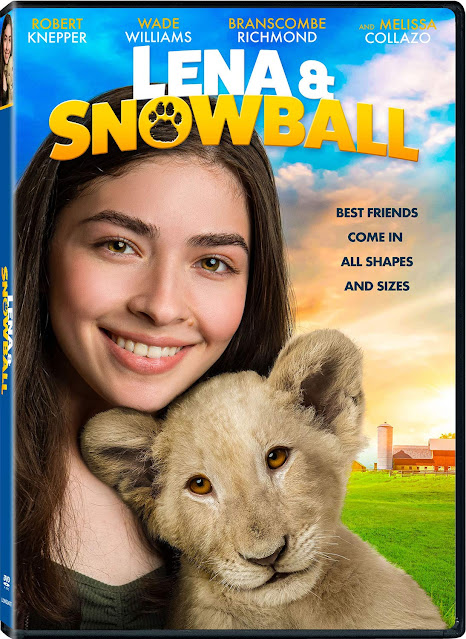 Bullied at school and lonely at home, Lena keeps hoping she’ll have a true friend someday. One afternoon, her dreams come true — in the shape of a cuddly white lion cub! Lena tries to keep playful Snowball out of trouble, but the clumsy poachers who kidnapped the valuable cub, and the cruel trophy collector who paid for him, are desperate to get him back. As Lena races to rescue poor Snowball, her new friend Jake will do anything to help. Be careful, or Snowball will melt your family’s heart!

Tonight my 15 year old daughter and I watched Lena and Snowball a movie about a lonely, teenager who lives with her father in a new town. She doesn't have any friends except her dog, dad works and the boys in town bully her because she stutters.

While out on her bike collecting garbage or things she finds around for her art she finds a white lion cub. We know the cub is out there because two bumbling idiots are being paid by some dude on a private plane to bring the cub to him. These two idiots fall out of the poacher boat they are in  losing the boat and lion. When they find the boat the tiny cub has escaped. OK...so the movie is taking place in Georgia. There are gators but white lion cubs? Where did they poach this baby from? My daughter and I kept talking about the baby. It is a tiny baby and we hoped that it was with it's momma and not taken away to make this movie. It was very young.  Most of the scenes containing actress Melissa Collazzo and the cub obviously weren't filmed at the same time so I am hoping that momma was close by.

Anyway back to the movie. Lena's mom has a new baby and husband and she is going through some tough times.  The bully group is a bunch of boys and one of them Jake, stops his friends from bullying her and eventually becomes her friend. She confides in him about the cub. His friends steal his phone and see the picture he took of the cub (we were upset she let him take a photo of the cub), the poachers see the picture, his friends know about the cub, yada yada.

In the long run the bad guys get their due, the cub is rescued, dad and Lena have a heart to heart, Lena and Jake are friends and everyone lives happy ever after but not before Lena decides to run away and writes a note,  the poachers break in and tie Lena up, steal the cub, Jake rescues her, they find the poachers, end up in the back of their pick up truck, call authorities and eventually all is well.

Things we liked about the movie:

The cub is adorable and we loved all scenes with the baby and the dog.

Lena's dad is awesome. He is trying very hard to give her a good life and feels bad about having to work all the time.

Lena's cool art garage. We both said we wished we had one.

Lena's stutter! She apparently only stutters in front of the people that bully her.

Lena's dad so desperate for her to have a friend invites Jake into the house and like a pimp sends her and her milkshake offering friend off. She didn't want him to come in. Tried to tell dad no but he still opened the door and sent them off where they ended up in her cool art room a separate building from the house and after night fall is seen cleaning dishes and looks out the window smiling because he knows his 15 year old is still hanging out with Jake. So weird.

When the poachers break in we didn't like the way they manhandled her. One guy is holding her around the shoulders and waist. My daughter was very uncomfortable with this and said it must have been uncomfortable to film.

BUT with all that said, we both enjoyed the movie and ended up looking up photos of white lion cubs on Pinterest for an hour.

Lena & Snowball are on DVD, Digital, and On Demand from Lionsgate. The Lena & Snowball DVD will be available for the suggested retail price of $19.98.