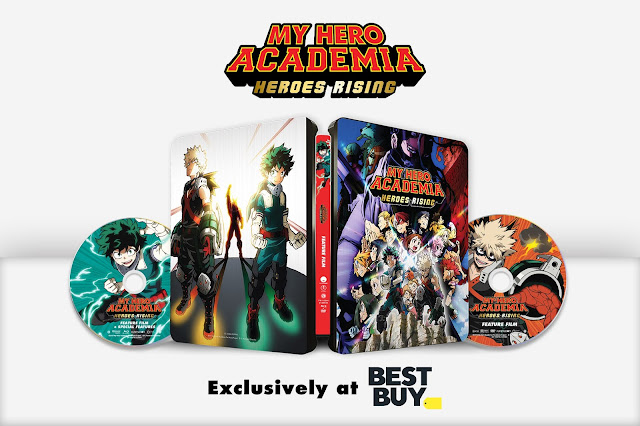 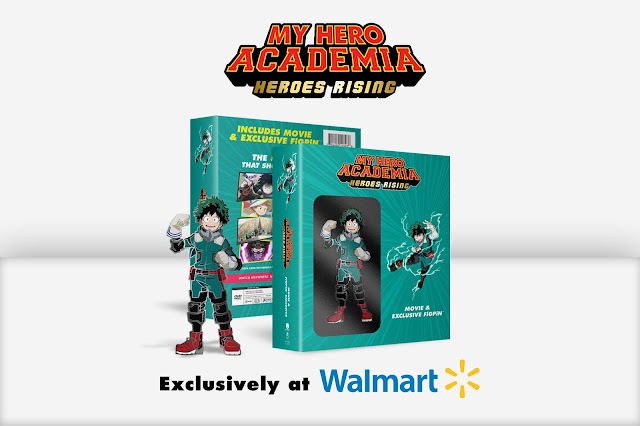 Culver City, CA (October 14, 2020) Funimation is releasing My Hero Academia: Heroes Rising movie bundle that includes the Blu-ray, DVD, and Digital download including SUB and DUB  is available October 27 in the Funimation Shop and select retailers. Released in theaters earlier this year, My Hero Academia: Heroes Rising delighted audiences and earned over $13 million at the box office making it the #8 highest-grossing anime films of all time in the U.S. Now fans can own the hit film!
Head over to Funimation’s shop to get the movie PLUS a 25th Anniversary Silver Chrome All Might Funko POP! with purchase. Don’t miss this exciting opportunity to add the film and the Funko POP! to your collection.
SYNOPSIS:
The number one hero anime is back for a battle beyond anything fans have ever seen! Class 1-A visits Nabu Island where they finally get to do some real hero work. The place is so peaceful that it’s more like a vacation … until they’re attacked by a villain with an unfathomable Quirk! His power is eerily familiar, and it looks like Shigaraki had a hand in the plan. But with All Might retired and citizens’ lives on the line, there’s no time for questions. Deku and his friends are the next generation of heroes, and they’re the island’s only hope.
CAST:
Director Kenji Nagasaki
Script Yosuke Kuroda
Music Yuki Hayashi
Original Creator Kōhei Horikoshi
Character Designer Yoshihiko Umakoshi
Voice Actors
Katsuki Bakugo
Japanese: Nobuhiko Okamoto
English: Clifford Chapin
Izuku Midoriya
Japanese: Daiki Yamashita
English: Justin Briner
All Might
Japanese: Kenta Miyake
English: Christopher Sabat
Mahoro
Japanese: Tomoyo Kurosawa
English: Dani Chambers
Katsuma
Japanese: Yuka Terasaki
English: Maxey Whitehead
Hawks
Japanese: Yuichi Nakamura
English: Zeno Robinson
Slice
Japanese: Mio Imada
English: Lydia Mackay
Chimera
Japanese: Shunsuke Takeuchi
English: Greg Dulcie
Mummy
Japanese: Kohsuke Toriumi
English: Brendan Blaber
Nine
Japanese: Yoshio Inoue
English: Johnny Yong Bosch
SPECS:
Run time: 104 minutes
Rating: PG-13
About Funimation
Funimation distributes the best anime to a passionate, global community of fans. For over 25 years, Funimation has pioneered an omnichannel approach to engaging and entertaining millions where they want it most—streaming, home entertainment, theatrical, e-commerce, merchandising, live events, and more.
Funimation’s streaming services offer a growing catalog of over 700 anime series and 13,000+ hours of content available on 15 platforms and in 47 countries. Funimation’s in-house team designs must-have, exclusive collectibles distributed through major retailers and an e-commerce site; Funimation’s theatrical division is responsible for six of the top 20 anime films in the U.S. As pioneers of the SimulDub™, Funimation is the gold standard for foreign language dubbing of Japanese anime with the highest quality standards and fidelity to the original artists. With a fan-centric approach, Funimation has built a loyal social community of over 30 million followers and earned the trust of Japan’s most iconic creators.
Funimation has nine offices in six countries and over 400 employees worldwide. As an independently operated joint venture between U.S.-based Sony Pictures Entertainment and Japan’s Aniplex, a subsidiary of Sony Music Entertainment (Japan) Inc., Funimation benefits from deep entertainment expertise across cultures, territories, and languages.
To learn more about Funimation, visit funimation.com and follow Funimation on Facebook, Twitter, and Instagram.