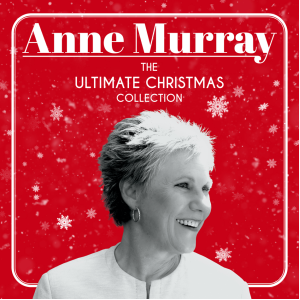 Available in 2CD and Digital Formats

“Anne Murray is the Canadian Queen of Music. Not only is she one of my favourite singers and entertainers, but she's also one of my favourite human beings of all time. When you meet her, she's exactly who you'd hope she would be. I can't tell you how thrilled I am, that she'll be sharing a collection of her favourite Christmas recordings with all of us. Truth be told, if Anne released an album of her singing names from the phonebook, I'd buy 20 copies of the damn thing. Enjoy, Merry Christmas, and long live the Queen!!!”

Santa Monica, CA — October 23, 2020 — Canadian music legend Anne Murray is bringing some early holiday cheer to fans with The Ultimate Christmas Collection, set to be released on November 20, 2020 in 2CD and digital formats via UMe/Universal Music Canada. This collection of 22 songs have been selected from Murray’s personal favorites from the six chart-topping Christmas albums she has released since 1981. Murray’s immediately identifiable, distinctive voice has carried messages of joy, comfort, and consolation to millions of listeners world-wide, and these time-tested carols continue to resonate just as powerfully today. The Ultimate Christmas Collection is available for preorder here: https://UMe.lnk.to/annemurray_ultimatechristmasPR

“I have always loved Christmas and over the years, my Christmas tours were my favourites,” explains Murray. “I loved looking out over a sea of Christmas sweaters and happy faces while they sang along to the familiar carols and other songs of the season. This collection is made up of those songs that have given me the most joy to record and perform over the years.”

Murray’s career began with chance encounters which resulted in remarkable achievements. The young singer from Nova Scotia was offered a couple of songs, including “Snowbird” – which soared beyond all borders and still sails the stratosphere to this day. Not long after, a television performance on Glen Campbell’s Goodtime Hour brought Murray into people’s homes and into their hearts, places she would occupy throughout her recording and performing years. Over the next decades, Anne Murray would sell over 55 million albums worldwide and did so while effortlessly moving between pop, country, and adult contemporary formats. The accolades were equally multitudinous, with several standout achievements.

Murray is a Canadian music trailblazer, with a string of firsts: first Canadian female solo singer to reach No. 1 on the U.S. charts, first to earn a Gold record (Snowbird), and the first woman to win Album of the Year at the Country Music Awards (A Little Good News), to name but a few. Her successes helped establish a path for further Canadian artists to conquer the world stage – Céline Dion, Shania Twain, kd lang, Alanis Morissette, and Sarah McLachlan among them.

During her illustrious career, Anne Murray received four Grammy® Awards, a record-breaking 24 Junos, three American Music Awards, three Country Music Association Awards, and three Canadian Country Music Association Awards. She is a Companion of the Order of Canada, the highest honor that can be awarded to a Canadian civilian, and in 2007 Canada Post issued a limited-edition Anne Murray stamp.  She has been inducted into the Juno Hall of Fame, the Canadian Country Music Hall of Fame, The Canadian Songwriters Hall of Fame, and Canadian Broadcast Hall of Fame. Murray has a Star on the Hollywood Walk of Fame, on Canada’s Walk of Fame as well as Nashville's Walkway of Stars. Murray has been involved in many charitable initiatives, most notably her years of work with Colon Cancer Canada. She continues to oversee the Anne Murray Centre, a charitable foundation and museum of her memorabilia which was established in 1989. For more information and extended biography, please visit AnneMurray.com

The Ultimate Christmas Collection is the companion album to The Ultimate Collection, which was released in 2017 and also included a tracklist of 22 Murray’s personal favorites.