Phineas and Ferb The Movie: Candace Against the Universe Soundtrack Available NOW #DISNEYMUSIC 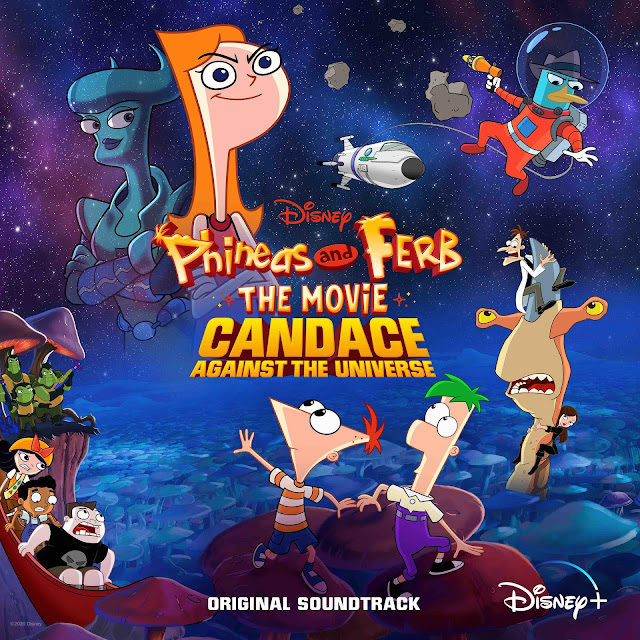 BURBANK, CA -- August 28, 2020 --"Phineas and Ferb The Movie: Candace Against the Universe," from Disney Television Animation premieres exclusively on Disney+ today. The soundtrack from Walt Disney Records is available now. "The Phineas and Ferb Ultimate Playlist" can be heard here.

The soundtrack features 17 songs including the singles, "Such a Beautiful Day performed by Ashley Tisdale; "We're Back' performed by Vincent Martella, Ashley Tisdale, Dan Povenmire and the end title credit "Silhouettes" performed by Robbie Wyckoff and the Phineas and Ferb cast.  The music is composed and produced by Danny Jacob ("Phineas and Ferb") and features guest songwriters Karey Kirkpatrick ("Something Rotten!"), Emanuel Kiriakou (Whitney Houston's "I Look To You") and Kate Micucci ("Garfunkel and Oates").

Phineas and Ferb The Movie: Candace Against the Universe track list:

2. "The Universe is Against Me"

8. "Us Against the Universe"

14. "Candace Against the Universe"

15. "Cowardly Story/Fall Out of Ship"

About "Phineas and Ferb The Movie: Candace Against the Universe"

"Phineas and Ferb The Movie: Candace Against the Universe" is an adventure story that tracks stepbrothers Phineas and Ferb as they set out across the galaxy to rescue their older sister Candace, who after being abducted by aliens, finds utopia in a far-off planet, free of pesky little brothers.

My kids were so into Phineas and Ferb a few short years ago. It was one of my favorite shows to watch with them especially since Ashley Tisdale from High School Musical voiced Candace. We still occasionally watch when we can't think of something to put on and are so excited there is a new movie to hopefully introduce them to a whole new generation of kids.

I have been singing Such a Beautiful Day while driving to work this week. It is so cheesy and I love that about it.

The sun is shining, not a cloud in the sky

My stars are aligning and I swear that ICould do anythingOn such a beautiful day
My life's an open book, I'm gonna write a new pageAnd I know that I'm mixing my metaphorsBut you can probably get the main gist of what I'm trying to say
Candace is one heck of a character. If you don't know anything about Phineas and Ferb Candace is their sister. Like most big sisters she is usually babysitting her younger brothers and they get into all kinds of outrageous shenanigans (OMG I love that word) but the only one who ever sees what they are up to is Candace and just when she thinks she will finally be able to show someone else what they are up to, everything is back to normal.
In this movie the brothers have to rescue Candace in outer space and I cannot wait to see it!
The soundtrack starts with Candace singing about this beautiful day she is having, a fun, bubbly, happy song then the next song The Whole Universe is Against Me an edgier song again sung by Candace after her apparent abduction.
What I love about this soundtrack was how we had pop, rock, Broadway style and so much more. I friggin love it and could listen to this anytime. All the songs stayed true to the style of the show and made me long for the days when my kids and I lay around watching Phineas and Ferb without a care in the world.
It was so much fun and my favorite score was probably Candace Against the Universe. It was epic. So high energy and fast. That double bass and shredding guitar was very Metallica!  I have played it way too much and really appreciated the "Doofenshmirtz Incorporated".
All in all a great soundtrack with something for everyone.

Disney+ is the dedicated streaming home for movies and shows from Disney, Pixar, Marvel, Star Wars, National Geographic, and more. As part of Disney's Direct-to-Consumer and International (DTCI) segment, Disney+ is available on most internet-connected devices and offers commercial-free programming with a variety of original feature-length films, documentaries, live-action and animated series, and short-form content. Alongside unprecedented access to Disney's incredible library of film and television entertainment, the service is also the exclusive streaming home for the latest releases from The Walt Disney Studios. Disney+ is available as part of a bundle offer that gives subscribers access to Disney+, Hulu (ad-supported), and ESPN+. Visit DisneyPlus.com to subscribe and/or learn more about the service.