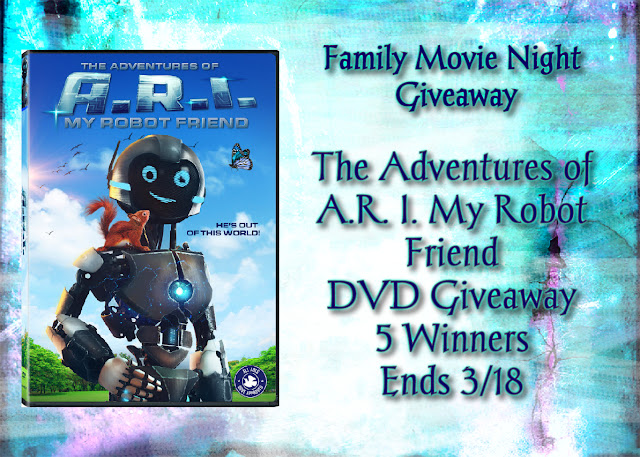 A heartwarming adventure for the whole family about finding friendship in the most unlikely of places, The Adventures of A.R.I: My Robot Friend will arrive on DVD, Digital, and On Demand March 10 from Lionsgate. This out of this world family adventure received the Dove Seal of Approval for All Ages and “provides the rare lesson of compassion being transferred to others through action”.   The Adventures of A.R.I: My Robot Friend DVD will be available for the suggested retail price of $14.98.

In this funny, thrilling family adventure, a boy named Noah finds a broken A.R.I.-9 robot at his dad’s tech job. After he accidentally reboots "Ari," the smart, playful robot comes to life. Then, when Noah brings Ari to school to show his friend Bethany, they are amazed to learn he can turn invisible — and even fly!  But Ari’s angry creators want to steal his circuitry for a new droid.  When they send a signal that puts the robot into battle mode, will Noah’s new best friend become his most dangerous enemy?

The movie scheduled to hit shelves March 10 from Lionsgate is the perfect family friendly movie.  The movie starts with some people trying to bring a robot to life. Things hit the fan and it is decided that they will dispose of the... what did the guy say...hunk of tin or something. Then we meet our lead teen Noah. Noah and his Dad had plans to watch a movie but when Dad has to run to work quick, Noah goes with. While lurking around Noah finds said Robot under a towel. What would any other kid do if he found a robot? Why steal it from Dad's job of course. My daughter and I were yelling at the TV. Noah, you are going to get Dad fired! Anyway.. Noah gets the robot home and after heating something up in the microwave LIFE!

Well not to give the whole story away but there are some cute moments of Noah and the Robot getting to know each other and the Robot now Ari learning his abilities and trying to remember "his father".  Ari's father had good intentions but some creators have not so nice ideas about the way they can use Ari.

Ari and Noah become fast friends and I loved the scenes of Ari helping Noah with some bullies and the Noah's streaming friend Bethany who has a popular channel. Very current and something appealing for the targeted audience.

Definitely has some cheesy moments but decent effects and a wonderful movie about friendship.