Never Stop Dancing Is A Must Read 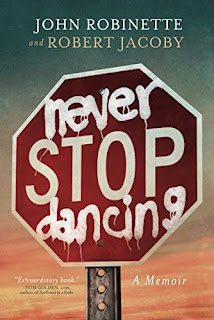 A summary...  “Be present,” “cherish each day,” “always say I love you.” John Robinette lived those words. Or so he thought.

In the spring of 2010, John’s wife, Amy, was killed in an accident on the streets of Washington, DC, leaving him alone to raise their two young sons. His world was shattered and his friend, Robert, was shattered seeing him grieve. Robert was at a loss as to what he could possibly do--what anyone could do--to help John in his miserable situation. Then the thought came: Just be with John; talk with him; listen to him. Robert proposed an unusual idea: he would interview John over the course of the first year after Amy’s death. The hope was to meet John directly in his experience of sorrow, explore his grief with him, and discover what lessons might be learned.

Now, nine years later, a book is born of those candid conversations. Never Stop Dancing avoids clichéd takeaways about grief and healing to chart a deeper, thornier examination of loss and regret. Robert and John were transformed through their shared experience and emerged strengthened with an abiding male friendship that cuts against the grain of pop-culture trends of quick fixes and easy answers.

Review coming but I had to let you know about this amazing book!