Savant (His Condition Is His Greatest Weapon) by John D. Richmond 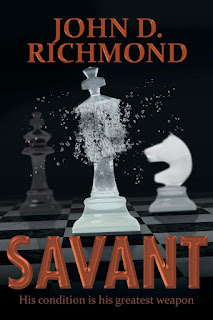 John Richmond’s son was diagnosed on the autism spectrum just after his fifth birthday. John began writing as a coping mechanism to deal with the grief he and his family were experiencing. This is a book written as it was being lived. The reader is taken into Richmond’s home and experiences some of the same coping mechanisms and techniques that they have utilized to make this condition livable and life a little easier. “I give my unsolicited advice as to how to make it through some of the most challenging times of this condition,” he explains.

John realized he had been given a new mission in life and soon published his first book, a memoir of their autism experiences titled Totally Lost: A Brutally Honest Assessment of Raising a Child on the Autism Spectrum.

John Richmond’s newest book, Savant, was released in June 2019.  It is a story about Michael Avery who has autism but is also a savant. He uses his incredible intellect and eidetic memory to become a world class detective. At age 8, his father was murdered basically right in front of him and the case went cold. Michael takes on his own investigation to bring his father's killer to justice.

"Savant" also serves another purpose and that is to help continue to bring awareness to what autism families face. The reader is taken into the mind of Michael and shown what some of the struggles are with this condition. “My entire purpose for writing is to bring autism awareness and fiction writing is just another avenue for me to do this,” states Richmond.


Savant
His condition is his greatest weapon
Everything about the Avery family was absolutely perfect. Steven and Diane Avery, with their son, Michael, lived a charmed life of wealth, success, and happiness. Until one day, when the world stopped turning and their lives were shattered in an instant and changed forever. Steven Avery was murdered in what appeared to be a random act of violence. After his father’s case went cold, Michael vowed to take matters into his own hands. Utilizing his eidetic memory and once-in-a-generation intellect, Michael reopened his father’s case and took on his own investigation to bring the killer to justice.

Savant had me from page 1. I was totally invested in Michael Avery's story. From the 8 year old boy who saw his father murdered in his house to the young man on a mission to find the person who killed his hero while navigating the world, finding love, and placing himself in a position of power with the motive of reopening his father's case and bringing the killer to justice I read if from cover to cover in 2 days.

Even if I didn't know it was written by someone who knows Autism I would know. I loved Michael. I loved how he thought, his brain, his memory, his recall, eidetic memory and how no nonsense he is. There were things about Michael that were so important for me to read again. Michael like my son doesn't understand emotions. I often find myself needing to be mindful of this. Sometimes he can sound callous, unfeeling but that is not his fault, that is his condition. Michael's condition allowed him to not get emotional, to think with his head not with his heart. By removing that component he was able to dig deep and see the facts without the BS that many of us get caught up in.

I loved that Michael found love with someone who was sensitive to his inability to have emotions. She helped him see why she was emotional about things and even got herself a ring because she knew it was not something Michael would do. She loved him unconditionally because of him not because of what he could or couldn't give her or how she could change him. She loved him. I definitely felt myself wishing this woman was out there and perhaps one day my son would find a love like this.

This is a wonderful murder/mystery/drama/love story. I even cried!  Not someone who cries at all but when Michael buried his father, I sobbed!

Wonderful story with a special kind of hero!