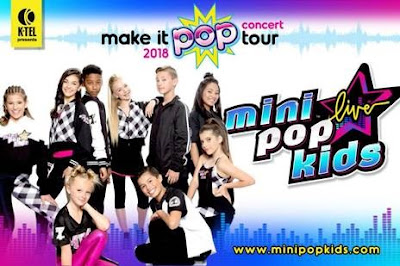 MINI POP KIDS
Kayleigh, Avery, Jazzy, Kylie, Peyton, Carter, Eliseo
Press Photos Of “Old Town Road”
Spotify: “Old Town Road”
YouTube: “Old Town Road”
Cover Art: “Old Town Road”
Quote from Jazzy: Can't wait for you all to see our new Music Video "Old Town Road". We had so much fun shooting it at a really cool place called Downey's Farm in Caledon, ON.  We got to jump on a huge blow up jumping pad, ride trikes on a track and pet farm animals (my favorite was the Bunny!!).  There were also some really cool special effects used in the music video, too!

Each year, more than 500 hopefuls audition to be a part of this legacy act, and many MINI POP KIDS have gone on to perform with the biggest names in the biz, including Justin Bieber, Beyonce, and on national TV and Broadway.

MINI POP KIDS have helped raise more than $30,000 for SickKids this year so far. The crew recently performed at the Toronto Hospital’s #GetLoud fundraising event with The Barenaked Ladies and Magic!, and are set to donate a portion of their new single “Get Loud’s” proceeds as a mark of their continued support.

It’s time to get your boarding pass to sing, dance and party alongside the MINI POP KIDS!
About MINI POPS KIDS
From the 80s to now, the MINI POPS KIDS have been entertaining global audiences for decades with their family-friendly spins on the world’s most popular songs; for the past 15 years the MINI POP KIDS have been Canada’s #1 children’s music group, with over a million albums sold, and topping the iTunes and Billboard charts. First launched in the 1980’s the original MINI POPS featured talented children singing pops hits of the day. It went on to sell millions of albums worldwide. Now that the original MINI POPS’ fans have grown up and have children of their own, K-Tel re- launched the MINI POP KIDS in 2004 in Canada.
About K-TEL International
Those immortal words — "But Wait, There's More!" — anyone who grew up in the 60s, 70s and 80s can recall with nostalgia and a smile those universally identifiable commercials from Winnipeg-based K-Tel, the original "As Seen On TV" ads. 'Hooked on Classics', K- Tel's best-selling album sold over 10 million copies and is still selling today. Who can forget the classic, Veg-O-Matic and the Miracle Brush? Both products sold millions -- these campy fun classics have become part of pop culture history. 'But Wait, There's More!...If you act now!' The iconic K-Tel was founded by Philip Kives, an innovator and legend in direct marketing and creator of the first infomercial. The K-tel licenses in vast catalog for TV and Film like Stranger Things, Baby Driver, and American Made. In 50 years of business, K-Tel has sold over half a billion albums worldwide. Today, K-Tel continues to license their music catalog of over 6000 tracks and has moved forward with technology and popular culture, with a worldwide distribution network with companies like iTunes, and licenses in vast catalog for TV and Film like Stranger Things, Baby Driver, and American Made. In addition to classic compilations, K-Tel is still turning out new releases as with their new album, 'MINI POP KIDS 16,' featuring kid friendly 'covers' of top pop tunes.