Catching Faith 2 Available on DVD, On Demand, and Digital HD on September 3rd, 2019

RLJ ENTERTAINMENT PRESENTS A STORY OF A FAMILY’S 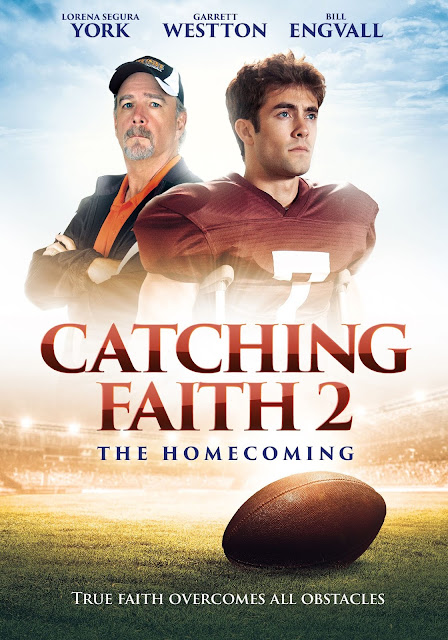 LOS ANGELES (July 24th, 2019) –RLJE Films will release Catching Faith 2 on DVD, On Demand and Digital HD on September 3, 2019.  Catching Faith 2 was co-written by Andrea M. Polnaszek and Alexandra Boylan and directed by John K.D. Graham.  Set four years after the original film (released by RLJE Films in 2015), this powerful sequel about a family and their struggle to do it all, features many returning cast members, including Lorena Segura York (Hollywood Heights), Bill Engvall (“The Bill Engvall Show”, “Last Man Standing”) and Garrett Westton (Buried Secrets).

SYNOPSIS:
Everything seems to be going wrong for the Taylor family right now. Just as Alexa is starting work at her dream job, she’s overwhelmed by caring for her mother suffering from Alzheimer’s disease. Her son, Beau, has just lost his professional football career to an injury and her daughter, Ravyn, needs help planning her last-minute wedding. Only with the support of friends and the guiding grace of their faith can the Taylors find the strength to cope with the tidal wave of drama and tragedy that is rolling over their lives.

A movie about a family going through some changes or “seasons” as the prayer group discusses.

Alexa is caring for her mother Loretta who suffers from Alzheimer's, her daughter Ravyn is getting married to her ex-best friend’s son, her son’s injury has sidelined his football career all while Alexa is starting a new job. Fortunately she meets with a prayer group of like minded, supportive women and has a wonderfully supportive husband John to listen to her and help with his mother-in-law.

When Beau becomes an assistant coach to a high school football team and Rayvn’s fiancé is being deployed early the wedding needs to be moved up and Alexa’s responsibilities increase.

Alexa against her own wishes brings her mother to assisted living for the day so that she can keep her safe while she works but when she runs away from the senior day care and gets kicked out Alexa realizes her husband had been right. She needs to ask for help so that she can be in the moment and not miss everything by trying to do it all. Her prayer group helps her by taking days to be with Loretta so that Alexa can handle all she needs to do.  When a sudden shift in responsibilities Alexa must face a whole new season and work with her ex-bestie so their kids can get married earlier.

I loved this movie. It wasn’t cheesy or preachy. I found myself jealous of the support group and curious as to why Alexa felt her plate was over filled when she had so much assistance but then I guess there wouldn’t be a movie. Basically the premise for me that asking for help when you need it doesn’t make you weak. We all need help once in a while.

Many families deal with the changes and hardships this family was going through and if you stay positive, reach out for each other to lean on, open your mind and heart, everything will work out.

Wonderful movie with a good message.


Disclaimer: I received a complimentary product for my honest opinion. No monetary compensation was offered. All opinions are my own.