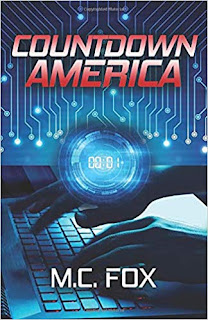 Truth can often seem stranger than fiction. The United States has certainly seen that played out in full over the past few years – from politicians gone haywire, Russian hacking scandals, the women’s empowerment movement and more – each news day seems crazier than the last. Author M.C. Fox looked at all that was happening around her – the unstable political climate, crazy international scandals and powerful women stepping up – and realized she had the perfect ingredients for a novel. From there, Countdown America was born, a whirlwind of a spy story set in the world of political cyber-espionage, all led by a fierce female protagonist.

Countdown America follows CIA agent and single mother Isabella Bendel. After the loss of her husband, she accepts a promotion to chief supervisor – a much less dangerous position than what she's accustomed to—so she can raise her two children without fear of leaving them without any parents. But any illusions of safety are shattered when, while on her Sunday morning jog in a Washington, D.C. park, she survives a brutal assassination attempt. She hauls her assailant into CIA headquarters, confident she can get to the bottom of why he was after her. Her blood runs cold when she learns the truth...as he was trying to take her out, armed terrorists abducted her children and mother right out of her home.

Pushed to the brink of what any mother can endure, Isabella calls on all of her training and deadly skills to get her family back. During this mission, she fights her way through assassins, cyber-terrorists, and duplicitous fellow agents, leading her to uncover a Russian threat that is hell-bent on destroying the United States.

“All mothers feel like they juggle a million things at once,” says Fox. “Isabella takes that to a whole new level by not only trying to save her family, but the entire United States. Countdown Americatakes readers not only on an entertaining, whirlwind adventure but motivating them to take on whatever crazy parenting and work throws at them – whether it involves Russian spies or not.”

M.C. Fox has long been fascinated by the world of espionage. Living right in the heart of New York City, she constantly is inspired by the sights and sounds of a large city, and how that forms the perfect environment for a fast-paced thriller. Given our currently unstable political climate, as well as the Russian hacking of the election, she knew that now was the perfect time to bring her readers a spy story set in the world of political cyber-espionage, led by a fierce female protagonist.