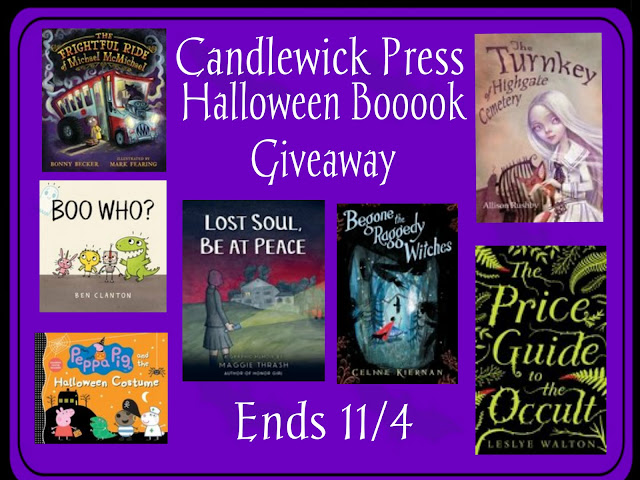 Halloween BOO-ks!
Ghosts, Ghouls, Monsters, and Spooky Stories for all ages!
I am so excited about this giveaway because I love books but I really love this genre of books. Candlewick Press has very graciously offered to gift one of my lucky readers 7 wonderful books for someone who loves to read. Enter below for your chance to win!

“Dark and delightful—for readers who enjoy chills with their giggles.” – Kirkus Reviews

When the Thirteen bus pulls up one dreary, stormy evening, something about it doesn’t seem quite right. The driver grins down with a mouthful of long, white teeth, and there’s barely any room to sit, but Michael McMichael is bringing his gran something very dear, so he gets on board despite his misgivings. But as they travel on and the rest of the passengers get off, Michael realizes there’s nothing normal about this bus — and the driver is getting creepier by the minute. Best-selling author Bonny Becker’s cleverly rhyming text will chill and thrill readers alongside Mark Fearing’s wonderfully funny illustrations, making this book perfect for Halloween story times — and lovers of things that go bump in the night.

Peppa finds that choosing the right costume can be a bit tricky in this Halloween treat for fans old and new.

What should Peppa Pig be for Halloween? She has lots of costume ideas, but her friends seem to have thought of everything already. Should Peppa be a pirate? No, Danny Dog is dressing up as a pirate—with an eye patch and everything! What about a nurse? No, that’s Suzy Sheep’s costume. Can Peppa pull together a Halloween costume that’s perfectly Peppa Pig and perfect for her favorite activity—in time for trick-or-treating? 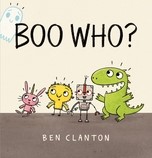 “A great example for both new kids and those welcoming them—at Halloween or for the rest of the year.” – Kirkus Reviews

Boo is new. And even if the other kids are welcoming, it can be scary being new, especially for a shy ghost who can’t play any of their games. Can Boo find a way to fit in and make friends with the rest of the group? From the creator of Rex Wrecks It! comes a funny story about feeling invisible—and finding a way to be seen and appreciated for who you are.

A year and a half after the summer that changed her life, Maggie Thrash wishes she could change it all back. She’s trapped in a dark depression and flunking eleventh grade, befuddling her patrician mother while going unnoticed by her father, a workaholic federal judge. The only thing Maggie cares about is her cat, Tommi…who then disappears somewhere in the walls of her cavernous house. So her search begins—but Maggie’s not even really sure what she’s lost, and she has no idea what she’ll find. Lost Soul, Be at Peace is the continuation of Maggie’s story from her critically acclaimed memoir Honor Girl, one that brings her devastating honesty and humor to the before and after of depression.

“An atmospheric, blood-drenched dark fantasy for a cold and stormy night.” – Kirkus Reviews

When Rona Blackburn landed on Anathema Island more than a century ago, her otherworldly skills might have benefited friendlier neighbors. Guilt and fear instead led the island’s original eight settlers to burn “the witch” out of her home. So Rona cursed them. Fast-forward one hundred-some years: All Nor Blackburn wants is to live an unremarkable teenage life. She has reason to hope: First, her supernatural powers, if they can be called that, are unexceptional. Second, her love life is nonexistent, which means she might escape the other perverse side effect of the matriarch’s backfiring curse, too. But then a mysterious book comes out, promising to cast any spell for the right price. Nor senses a storm coming and is pretty sure she’ll be smack in the eye of it. In her second novel, Leslye Walton spins a dark, mesmerizing tale of a girl stumbling along the path toward self-acceptance and first love, even as the Price Guide’s malevolent author—Nor’s own mother—looms and threatens to strangle any hope for


Entry-Form
Disclaimer: I received the same books for my honest opinion. No monetary compensation was offered. Look for my reviews on all these books soon.