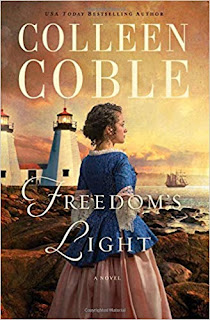 Dreaming of this story many years ago, Coble is excited to finally bring a historical romantic suspense to her readers.

“There are certain books that are very special to authors, and Freedom’s Light is one of those special books to me. It’s the book that landed me my awesome agent, Karen Solem, back in 2000,” said Coble. “She loved this story, but we never sold it to a publishing house, and I went in a different direction as I started working on contemporary romantic suspense.”

Hannah Thomas does her best to escape Galen Wright’s sinister intentions by marrying an older lighthouse keeper in faraway Massachusetts. Despite her hasty getaway, Hannah’s world is turned upside down when John is killed in one of the first battles of the Revolutionary War. Though John’s family disapproves, Hannah is permitted to continue the difficult task of tending to the twin lighthouses in her husband’s place.

Her sister Lydia arrives, and Hannah believes her loneliness and heartache will subside now that her sister is keeping her company. Much to her dismay, Lydia obsesses over Galen and her desire to marry a Tory, escalating the dangerous tides swirling around her.

A stormy night brings a shipwrecked sea captain to Hannah’s door, and though he is a Tory, her heart is as traitorous as the dark-eyed captain. Even though she discovers Birch Meredith isn’t the enemy he seemed at first, Hannah isn’t sure their love will ever see the light of freedom.

Will Hannah and Birch put aside their differences and follow their hearts, despite being on opposite sides of the war? With rich characters, detailed scenery, and a glimpse into Revolutionary War America, readers will love the suspense and redemption in Freedom’s Light.

“I never forgot Hannah and Birch,” said Coble, “and am so pleased that now their story will be out into the world.”

About the Author
Colleen Coble is a USA TODAY bestselling author and RITA finalist best known for her coastal romantic suspense novels, including The Inn at Ocean’s Edge, Twilight at Blueberry Barrens, and the Lavender Tides, Sunset Cove, Hope Beach, and Rock Harbor series.