THE TRUTH IS STILL OUT THERE:
“THE X-FILES” CELEBRATES 25TH ANNIVERSARY
WITH BARBIE® DOLLS 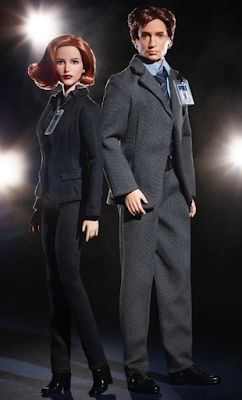 SHOP.FOX.COM ALSO UNCOVERS AN EXCLUSIVE LINE OF MERCHANDISE
AND PUTS FANS ON THE CASE WITH A SPECIAL TRIVIA CONTEST TO COMMEMORATE THE MILESTONE ANNIVERSARY
In anticipation of next month’s 25th anniversary of the iconic sci-fi series THE X-FILES, 20th Century Fox Consumer Products has partnered with Mattel to develop THE X-FILES, Barbie® collection showcasing fan-favorite television characters, Special Agents Fox Mulder (David Duchovny) and Dana Scully (Gillian Anderson). Available starting today on Amazon.com and on the Barbie.com, THE X-FILES Barbie® dolls celebrate the influential series that went from breakout sci-fi favorite to massive global hit, becoming one of the most successful television dramas of all time.

Inspired by the hit sci-fi series, this doll assortment includes: Barbie® The X-Files™ Agent Fox Mulder doll, and Barbie® The X-Files™ Agent Dana Scully doll. Each doll wears their signature looks from the ‘90s – dark suits, “FBI” ID and badge.  Fans can relive Mulder and Scully’s investigations of unexplained, mind-bending cases with each of the series-influenced Barbie dolls, both arriving with a doll stand and Certificate of Authenticity.

In addition, starting today, fans have a chance to stump fellow X-Philes with their own trivia questions highlighting the various mythologies, unearthly conspiracy theories, and memorable Mulder and Scully moments. From now through September 6th, fans are encouraged to submit their most probing, challenging and interesting questions (and answers!) via Shop.Fox.com for the chance to receive an exclusive X-Files prize pack and have their question included in “The Truth is Out There Trivia Contest.”

On the series’ 25th anniversary on September 10th, “The Truth is Out There Trivia Contest” will officially land on Shop.Fox.com. Participants who answer the most questions correctly, before the contest closes on September 17th, will automatically be entered to receive “The X-Files” 25th Anniversary Prize Pack – which includes the Barbie® The X-Files™ Agent Fox Mulder and Barbie® The X-Files™ Agent Dana Scully dolls.

For the series’ anniversary, 20th Century Fox Consumer Products has collaborated with other key licensees as well as creating its own exclusive line of merchandise, including a 25th Anniversary glow-in-the-dark tee and poster, an enamel pin, and transforming mug, now available to fans on Shop.Fox.com
Loot Crate - To celebrate the 25th anniversary of X-Files, Loot Crate, the leading subscription commerce platform for fans, will feature X-Files related items in its September “Invaders” themed Loot Crate, Loot Crate DX, and Loot Wear product lines - including an exclusive “X-Files Dimensional Poster” collectible in Loot Crate DX that commemorates Mulder’s iconic “The Truth is Out There” poster!
About The X-Files
The X-Files originally premiered on September 10, 1993. The influential series went from breakout sci-fi favorite to massive global hit, and became one of the most successful television dramas of all time. The show, which earned 16 Emmy Awards, five Golden Globes and a Peabody Award, follows FBI special agents Scully (Anderson) and Mulder (Duchovny) as they investigate unexplained cases – “X-Files” – for which the only answers involve paranormal phenomena. Produced by 20th Century Fox Television and Ten Thirteen Productions, The X-Files is created and executive-produced by Chris Carter.

About Mattel
Mattel is a leading global children's entertainment company that specializes in design and production of quality toys and consumer products. We create innovative products and experiences that inspire, entertain and develop children through play. We engage consumers through our portfolio of iconic franchises, including Barbie®, Hot Wheels®, American Girl®, Fisher-Price® and Thomas & Friends®, as well as other popular brands that we own or license in partnership with global entertainment companies. Our offerings include film and television content, gaming, music and live events. We operate in 40 locations and sell products in more than 150 countries in collaboration with the world's leading retail and technology companies. Since its founding in 1945, Mattel is proud to be a trusted partner in exploring the wonder of childhood and empowering kids to reach their full potential. Visit us online at www.mattel.com.