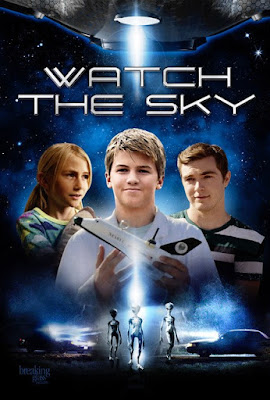 Watch The Sky focuses on two brothers; Michael and Shawn. Michael has already moved out and the younger, Shawn is still very much mourning his deceased mother. Shawn  is really smart and gets his brother’s help to launch a balloon with a camera into the sky and hopefully capture some video of outer space.

The movie does a decent job of creating a fun, youthful wonder like the family friendly movies of the 80s. The wonder and awe of the kids is well balanced with the adults dealing with dead cows, a mysterious disappearance, a father moving on, and mention of government cover-up. It is all kept very light with jokes, antagonizing insults, a heartbreaking flashback realization.

I wasn’t expecting much but what I did get was a funny movie that choked me up as well as American Pride. I loved the flag flying in the background with the Sheriff standing in front of it and the flag emblazed Space Shuttle the boys carry.

While this was billed as a family friendly movie, I must mention that there were some colorful jokes that while I thought were funny some parents may not want their kids to hear.

An old man talking to his old wife who just spent some time praying “You used to be a beautiful woman, now you are ugly.”

Police Department co-workers where guy asks another if his woman keeps his balls in a jar.

Dad jokes that he is going to put a GPS up his son’s butt.

Michael says to Shawn, “I just wanted to get laid tonight”

One of the brothers tells the other.  “Last one up the hill gets their butt probed” (by alien’s of course).

While the jokes are innocent enough, I am not sure that they are for all families.


Disclaimer: I received a complimentary screener link for my honest opinion. No monetary compensation was offered.