Infatuation: A Novel Of Questionable Taste by Jonathan Harris 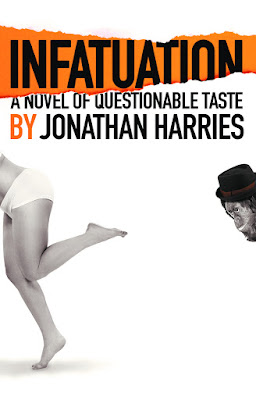 Even the most serious thinkers among us need to take a break from time to time—whether it’s in the form of a Will Ferrell or Melissa McCarthy movie, or an internet meme of a cat—sometimes we just need some pure entertainment. That’s exactly what Jonathan Harries’ new novel, Infatuation: A Novel of Questionable Taste (July 6, 2018) provides. Harries wrote the book with no other aim in mind than to provide his reader with some fun and entertainment—and he succeeds in spades. A book that is rollicking, romantic, and more than a little bit absurd, readers will be hooked from start to finish, and will be hard pressed to stop laughing long enough to read through to the end.
From start to finish, this book is mindless fun, and doesn’t pretend to be anything else.
“I set out to write a book that someone with a two or three-hour flight ahead of them could read and enjoy,” says Harries. “It doesn’t get into politics, it doesn’t expose the dark side of society. It requires very little thinking and, of course, a sense of humor.”

When Fanny Packer, a voluptuous belly dancer steals a mysterious codex that looks like the Kama Sutra on steroids from a notorious mafia family in Rome, total chaos ensues. Fortunately for Fanny, her secret admirer, Charley Brooks, will do anything to protect her. Unfortunately that includes out-maneuvering the mob’s most horrific hit man; the hirsute dwarf, Nano Mortale.