A CLASS TRIP TO THE OCEAN IS UNDERWAY AS
WARNER BROS. HOME ENTERTAINMENT RELEASES
DC SUPER HERO GIRLS: LEGENDS OF ATLANTIS
ON DIGITAL AND DVD OCTOBER 2, 2018 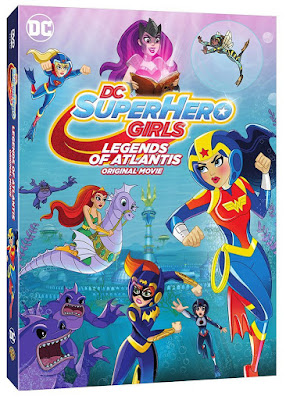 It seems like an uneventful day at school until the powerful Book of Legends is suddenly stolen from Super Hero High. In order to uncover the mystery, Wonder Woman, Batgirl, Supergirl, Bumblebee and the rest of the Super Crew must journey through the depths of the ocean to Atlantis. There, the girls encounter Mera and Siren, the ocean-dwelling thieves, who prove to be a formidable match. In order to recover the stolen tome and return it to its rightful place, DC Super Hero Girls must band together and use their collective powers to successfully get back to land…and back to class!

From Warner Bros. Consumer Products and DC Entertainment, the DC Super Hero Girls universe encourages young girls, ages 6-12, to explore their own powers and strengths through original content, including all-new films, webisodes and TV specials. The franchise offers young fans inspiration and encourages teamwork, friendship and empowerment. DC Super Hero Girls: Legends of Atlantis will connect with fans throughout the world via waves of digital content, including DCSuperHeroGirls.com, the DCSHG App, YouTube Channel and Instagram, as well as a global licensing and merchandising program.

About DC Entertainment
DC Entertainment, home to iconic brands DC (Superman, Batman, Green Lantern, Wonder Woman, The Flash, etc.), Vertigo (Sandman, Fables, etc.) and MAD, is the creative division charged with strategically integrating across Warner Bros. and WarnerMedia.  DC Entertainment works in concert with many key Warner Bros. divisions to unleash its stories and characters across all media, including but not limited to film, television, consumer products, home entertainment, and interactive games.  Publishing thousands of comic books, graphic novels and magazines each year, DC Entertainment is one of the largest English-language publishers of comics in the world.

DC Super Hero Girls and all related characters and elements are trademarks of and ©DC Comics. (s16)

About Warner Bros. Consumer Products
Warner Bros. Consumer Products (WBCP), a Warner Bros. Entertainment Company, extends the Studio’s powerful portfolio of entertainment brands and franchises into the lives of fans around the world.  WBCP partners with best-in-class licensees globally on an award-winning range of toys, fashion, home décor, and publishing inspired by franchises and properties such as DC, J.K. Rowling’s Wizarding World, Looney Tunes and Hanna-Barbera. The division’s successful global themed entertainment business includes groundbreaking experiences such as The Wizarding World of Harry Potter and Warner Bros. World Abu Dhabi (opening 2018). With innovative global licensing and merchandising programs, retail initiatives, promotional partnerships and themed experiences, WBCP is one of the leading licensing and retail merchandising organizations in the world.