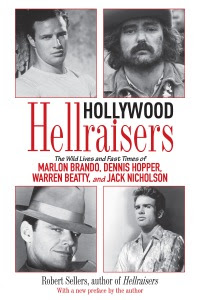 I don’t know what people expect when they meet me. They seem to be afraid that I’m going to piss in the potted palm and slap them on the ass.”—Marlon Brando

“I should have been dead ten times over. I believe in miracles. It’s an absolute miracle that I’m still around.”—Dennis Hopper

“You only lie to two people in your life: your girlfriend and the police.”—Jack Nicholson

“The best time to get married is noon. That way, if things don’t work out, you haven’t blown the whole day.”—Warren Beatty

They’re the baddest bad-asses Hollywood has ever seen: Marlon Brando, Dennis Hopper, Warren Beatty, and Jack Nicholson. They are men to whom rules did not apply; normal standards of behavior were simply too wearisome to worry about. These are men who brawled, boozed, snorted, and screwed their way into legendhood—but along the way they changed acting and the way movies were made forever. Hollywood Hellraisers is a whistle-stop tour of jaw-dropping sexual activity, misbehavior of an Olympic standard, all-out excess, and genuine madness. It’s a wonder Hollywood survived.

Cigarettes tucked in a T-shirt, a devilish grin, swagger and ego is all it takes to be a bad boy during the days of Brando, Hopper, Beatty and Nicholson.  These guys were rebels on the screen and in real life. They didn't believe in moderation of any kind.  Fast, and Furious is how they live their lives and God bless them.

This book is the inside look of Hollywood during the Hollywood Hellraisers hay day. If you love reading about who had sex with who, who broke up which relationship, behind the scenes movie info  you will love this book. Robert Sellers covers each actor in each chapter with a detailed recount of their lives from their arrival in Hollywood to now. I found myself skipping over parts of Dennis Hopper in each section but devoured the rest especially Nicholson and Beatty!


If you get offended easily, this is NOT the book for you.