Wonder Crew Dolls For Boys! It Is About Time. #thanksPlayMonster 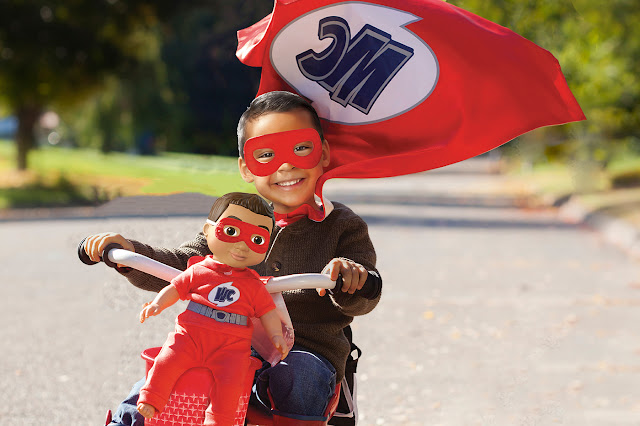 PLAYMONSTER TO EMPOWER A GENERATION OF BOYS
WITH WONDER CREW DOLLS

Company to Launch Line of Buddies that
Inspires Boys to -- Go Anywhere, Be Anything --

Wonder Crew is turning the table on the conversation about gender stereotypes and toys, which has largely been focused on presenting more options for girls to play. Combining the adventure of an action figure with the emotional connection of a stuffed animal, the 15" Wonder Crew buddies have coordinated role play accessories for their kid owners.

“We are thrilled to bring Wonder Crew into the PlayMonster portfolio,” said Bob Wann, Chief PlayMonster of PlayMonster LLC. “We know from consumer research that boys ages 2 – 5 are already playing with dolls, yet there is a distinct hole in the marketplace for them. We believe it’s the perfect time to introduce this important toy line to mass market as big retailers and our industry are together breaking down gender stereotypes to help boys develop their emotional maturity including compassion and kindness.

Laurel Wider, a psychotherapist and mom, created Wonder Crew after her son came home from preschool one day and announced that “boys aren’t supposed to cry.”  Frustrated by many of the messages boys were (and weren't) receiving and inspired by the way play influences child development, Wider created Wonder Crew to encourage kids to connect emotionally and be their full selves.  Launched on Kickstarter in March 2015, Wonder Crew quickly drew praise from parents and media alike, and earned Wider an invitation from the White House to speak during a conference on breaking stereotypes in media and toys.

“As Wonder Crew reaches market scale and the industry redefines stereotypes on dolls and other toys, I feel fortunate to have PlayMonster as a partner,” said Wider. “PlayMonster’s full commitment to the brand, combined with the company’s resources and our shared values, promises to deliver amazing adventures.”

As a result of PlayMonster’s commitment to Wonder Crew, the line will hit retail shelves early 2017.  Wonder Crew, targeted to boys ages 2 – 5, includes four buddies of different races each wearing Superhero gear, and packaged complete with a matching cape and mask for the child. Adventure Packs in the themes of builder, explorer and snuggler (for bedtime) will be sold separately and also come with matching gear for the child.

About PlayMonster LLC
Beloit, WI-based PlayMonster is a toy and game company that believes in the power of play to make a positive difference in people’s lives. Delivering great play value by designing, manufacturing and marketing quality products like the award-winning The Game of THINGS…®, 5 Second Rule®, Mirari®, Stinky Pig™, Yeti in my Spaghetti®, Farkle, Chrono Bomb®, OK to Wake!®, Lauri®, Stratego®, Roominate™, My Fairy Garden™ and Wooly Willy® is how PlayMonster helps keep play alive for all ages