Pets Ride Free With Amtrak For Until March 31st 2017

Watson the Jack Russell Terrrier was the first pet to board an Amtrak train for free at Union Station in Washington, D.C., and was escorted by Jason Molfetas, Amtrak Executive Vice President, Chief Sales and Marketing, on December 6, 2016 in celebration of The Secret Life of Pets on Blu-ray and DVD out now. 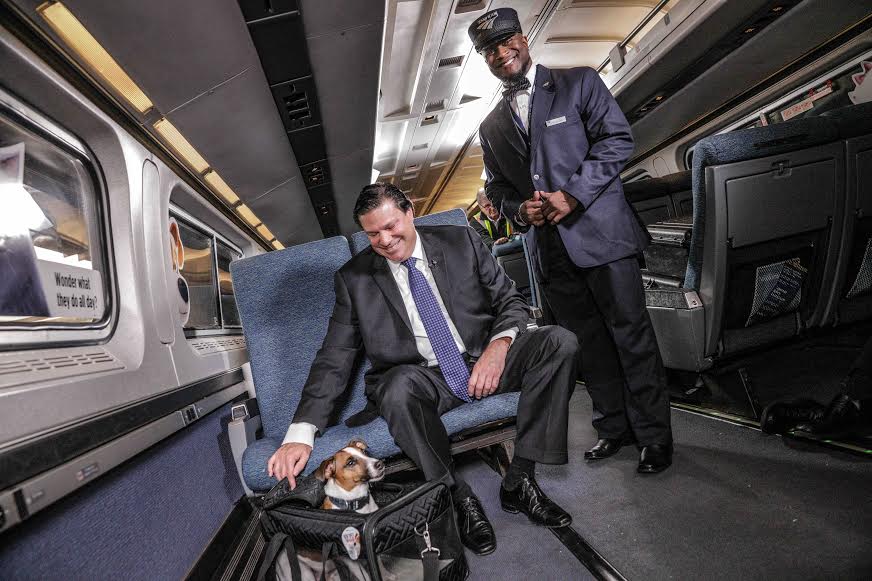 Universal Pictures Home Entertainment and Amtrak recently announced the 'Pets Ride Free' promotion in celebration of The Secret Life of Pets on Blu-ray and DVD, and to kick off the launch of the promotion, Watson boarded Amtrak as the very first pet to ride free. The offer will be available to customers to book now through December 11, 2016 or while supplies last, and allows pets to travel at no additional cost on participating Amtrak routes from December 9, 2016 through March 31, 2017.


To travel with a small dog or cat, tickets must be purchased at least three days prior to travel and are valid for up to March 31, 2017. Only one cat or one small dog are allowed in an enclosed carrier on trips up to seven hours in length. Both pet and carrier must be a combined weight of 20 pounds. To learn more about the Amtrak pet program visit Amtrak.com/pets. To make a pet inclusive reservation, please call 1-800-USA-RAIL or visit a staffed station.


In their fifth fully animated feature-film collaboration, Illumination Entertainment and Universal Pictures present The Secret Life of Pets, a comedy about the lives our pets lead when we leave for work or school, which has grossed more than $873 million in global ticket sales. Max, voiced by Louis C.K., is a loyal terrier living a perfectly happy existence until his owner, Katie (Ellie Kemper) brings home Duke (Eric Stonestreet) a big, boisterous mutt she finds at the shelter. When Max and his unruly new “roommate” slip away from their dog-walker, they find themselves lost in the urban jungle of New York City.  In an attempt to stay ahead of animal control and a rebel band of abandoned pets led by an unhinged bunny named Snowball (Kevin Hart), they put aside their differences to survive the epic journey back home.

About Amtrak
Amtrak — America’s Railroad® — is dedicated to safe and reliable mobility as the nation’s intercity passenger rail service provider and its high-speed rail operator. With our state and commuter partners, we move people, the economy and the nation forward, carrying more than 30 million Amtrak passengers for each of the past six years. Formally known as the National Railroad Passenger Corporation, Amtrak is governed by a 10-member board of directors, nine of whom are appointed by the president of the United States plus the Amtrak CEO. Anthony R. Coscia is board chairman and Jeffrey R. Moreland is vice chairman. Amtrak operates more than 300 trains daily — at speeds up to 150 mph (241 kph) — connecting more than 500 destinations in 46 states, the District of Columbia and three Canadian Provinces. Learn more at Amtrak.com or call 800-USA-RAIL for schedules, fares and other information. Check us out at blog.Amtrak.com, Like us on Facebook.com and Follow us on Twitter @Amtrak.