BE A BROADWAY STAR ANNOUNCES RELEASE OF FREE ANNUAL EXPANSION PACK IN TIME FOR THE HOLIDAYS! 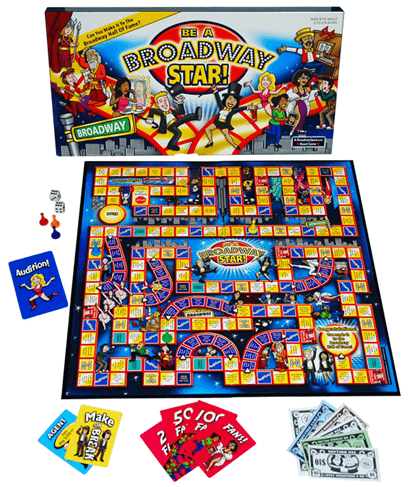 (October 13th, 2016 – New York, NY) The beloved Broadway board game Be A Broadway Star announces their new 2015/2016 Expansion Pack in time for the holidays!

The 2015/2016 season Expansion Pack is currently available to download for free at www.BeABroadwayStar.com, and includes brand new “Audition” and “Make or Break” cards featuring smash-hit shows like Hamilton, Spring Awakening, Waitress, School of Rock, Fiddler on the Roof, Something Rotten, An American in Paris, On Your Feet, The Color Purple, Fun Home and more!

Creator of Be A Broadway Star, Broadway Producer Ken Davenport says, “This board game has been a Broadway fan favorite for years, and is the number one selling Broadway themed holiday gift on Amazon.com. Despite its wide popularity, I knew we had to keep the game current with updated cards featuring some of the top shows from each Broadway season. We will be releasing annual Expansion Packs in time for the holidays, so that theatre fans and their families can play and sing along with fresh show tunes from the latest and greatest that Broadway has to offer.”

The Be A Broadway Star board game was released in 2011 as a one-of-a-kind game designed to get players singing and dancing on each turn with the goal of reaching the Broadway hall of fame. The game has been featured on the TODAY SHOW as one of Kathie Lee and Hoda’s “Favorite Things,” and has been featured in numerous holiday guides.

"Anyone who has ever wondered what it was like to see their name in lights can experience the thrill first hand. It is the perfect gift for any kid, or adult really, who has ever had the dream to be on Broadway,” says creator Ken Davenport.

Ken’s unique production and marketing style has garnered him international attention, including two front page articles in the NY Times and features on MSNBC, Rock Center, Fox News, BBC, and his favorite, a mention in Jay Leno’s monologue on “The Tonight Show.” Named one of Crain's “40 Under Forty,” Ken is one of the co-founders of TEDxBroadway, and was featured on a national commercial for Apple's iPhone. He created the best-selling Broadway board game Be A Broadway Star and runs a number of theatrical websites including DidHeLikeIt.com. His blog, TheProducersPerspective.com, has been featured in Vanity Fair, New York Magazine, The Gothamist and more.

Upcoming projects include his original musical Gettin’ The Band Back Together, which premiered at George Street Playhouse, and revivals of Once on This Island, The Great White Hope and Mass Appeal, as well as the movie, Band Dorks.