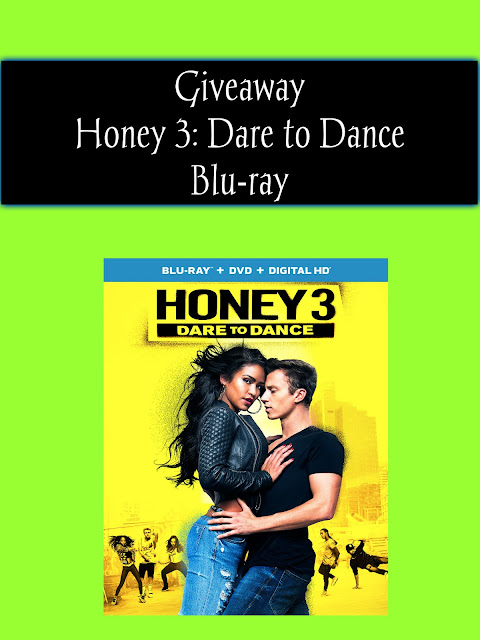 AVAILABLE ON BLU-RAY™, DVD AND DIGITAL HD
ON SEPTEMBER 6, 2016 FROM UNIVERSAL 1440 ENTERTAINMENT

Universal City, California, June 22, 2016 – After losing her place at a prestigious academy, a young dancer struggles to keep her passion alive in HONEY 3: Dare to Dance, the high-energy dance drama arriving on Blu-ray™ Combo Pack, DVD and Digital HD as well as On Demand on September 6, 2016, from Universal 1440 Entertainment, the original content production arm of Universal Pictures Home Entertainment. Starring American recording artist Cassie Ventura (The Perfect Match, Step Up 2: The Streets) and Kenny Wormald (Footloose, Love & Mercy), HONEY 3: Dare to Dance is an inspirational story about overcoming adversity and the power of dance.  The Blu-ray™, DVD and Digital HD come with over 30 minutes of exclusive bonus features including deleted scenes, extended dance sequences, commentary with the director, and a behind-the-scenes look at creating the spectacular dance performances that make up HONEY 3: Dare to Dance.

At a prestigious South African school, Melea and her boyfriend imagine a hip-hop version of Romeo and Juliet, but Melea’s dreams are dashed when she’s unable to pay tuition and is forced to leave. Determined to fulfill her destiny, she does the unthinkable – persuades the community to support her artistic and unique vision. When adrenaline-filled rehearsals cause dance crew rivals and egos to get in the way, everything falls apart. Once again, Melea dares to dream and risks it all to put on a performance you’ll never forget. From the director of Honey and Honey 2, Honey 3 is full of dance, romantic love triangles and heart-pumping music you won’t want to miss.

Bille Woodruff (The Perfect Match, Honey, Honey 2, The Game) returns with a fresh young cast to direct HONEY 3: Dare to Dance, the inspiring film full of gravity-defying stunts and jaw-dropping choreography.  The HONEY 3: Dare to Dance original album will be available worldwide, digitally, on September 2, 2016.

DIGITAL HD, BLU-RAYTM and DVD BONUS FEATURES:
The Blu-ray™ Combo Pack includes a Blu-ray™, DVD and Digital HD with UltraViolet™.
·         Blu-ray™ features a pristine high-definition picture, theater quality sound and exclusive extras.
·         DVD offers the flexibility and convenience of playing movies in more places, both at home and away.
·         DIGITAL HD with UltraViolet™ lets you watch movies anywhere, and plays on your mobile devices.


To Purchase:
To Enter the Giveaway

About Universal 1440 Entertainment
The Universal 1440 Entertainment banner develops and produces live-action and animated non-theatrical productions directly for distribution in all media worldwide. Since its formation in 2005, the group has assembled an exceptional roster of animated family fare, including the animated feature-length film The Little Engine That Could; the Daytime Emmy®–winning Curious George television series on PBS KIDS; and a string of hit Barbie movies, based on the world-renowned Mattel-branded doll. The group also has successfully built upon some of Universal’s highly celebrated live-action franchises, more recently launching the Tony Award®–nominated hit touring stage production Bring It On: The Musical; the legendary action-adventure Scorpion King 4: Quest for Power; the adrenaline-fueled actioner Death Race 3: Inferno; the terrifying suspense saga Curse of Chucky; and the epic sci-fi adventure Tremors 5: Bloodlines. Among projects currently readying for release are the exhilarating action-thriller Hard Target 2 and the high-energy dance drama Honey 3.