Against the Wild 2 DVD #Giveaway #ATW2 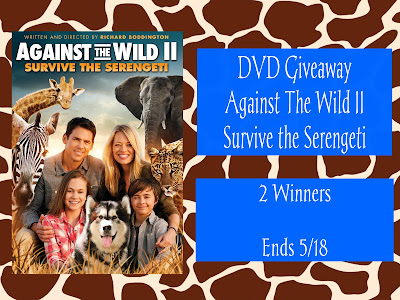 
For bickering siblings Ryan (John Paul Ruttan of Shelby: A Magical Holiday Tail) and Emma (Ella Ballentine of Standoff), it was going to be a fun weekend visit with their dad who is temporarily working in Africa. But when their small plane crash-lands in the Serengeti, they have only each other – along with their fellow passenger, a Malamute named Chinook – to rely on. The rescue teams are searching. Their mom (Jeri Ryan of “Star Trek: Voyager” and “Boston Public”) is panicked. Can brother, sister and one courageous dog now learn how to conquer their fears and trust each other in the most beautiful yet untamed wilderness of all? Ashley Dowds (“Scout’s Safari”) co-stars in this exciting new family adventure from the creator of the original Against the Wild Richard Boddington.

Like the first Against the Wild, Against the Wild 2 Survive the Serengeti is about brother and sister Ryan and Emma whose plane goes down leaving them to tend to the pilot and take care of themselves while searching for help. Walking through the jungle searching for a mine with the help of Chinook (the same dog who was in the first one), the kids save an elephant they decide to name Rumba who now thinks he is their pet.

The movie takes us on a adventure as the kids take time to frolic and get hosed off in the water with Rumba, fight off hyenas, escape a stampede of zebras, get woken by a giraffe, pass out from heat exhaustion, survive a bridge collapse thanks to Chinook, fight off the King of the Jungle, and get saved by they elephant friend before their parents find them.

All in all it is a great action packed movie for the family that kids will definitely love.

Although I believe some lessons in safety should follow like purifying water and staying at the plane location instead of gallivanting through the jungle I give this movie an A+ for all the animals guest stars.

Disclaimer: I received a complimentary product for my honest opinion through an Anchor Bay Entertainment Campaign. My reviews are 100% honest and true based on my personal opinion not on a company’s description or request. No monetary compensation was offered or received.