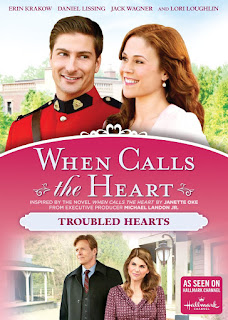 SYNOPSIS
Big revelations are in store for Hope Valley as Elizabeth moves into her own rowhouse, dismaying Jack, who has been planning to build a new home for the both of them. Rosemary discovers that Lee has taken out a loan and worries that he is in financial difficulties. And Jesse, the young drifter who works in Abigail's kitchen, has information that could ruin Pastor Frank’s good standing in Hope Valley, and begins his plan to extort the pastor with an old "Wanted", poster…

As usual the show has so many lovable characters that there is so much to cover. So if you don't want to know what happens, stop reading and move down to the To Purchase link.

Having a romantic evening in Hope Valley will always be interrupted.


Elizabeth decides it is time to put roots down and wants to rent Abigail’s Old House.
Jesse’s job takes him to Abigail's where he hopes to run into Clara more often, as does she. Who worries about what they will be wearing while serving the customers? A woman interested, that's who.
Mayor is considering selling his share of Abigail's to Mr. Humphreys; a crotchety business man who wants to change the way Abigail does things. She is none too happy.
After Dot’s husband is murdered Bill tells her he will be looking into his death. While everyone knows her husband wasn't an innocent man, he didn't deserve what he got.
Rosemary is helping with the Mill and Lee will need to show patience like never before as she takes over and liberties with his new office
Jesse tries to get Pastor back into the “club” or aka the GARRISON GANG
Abigail and Elizabeth nicely, butt heads when it comes to Cody and his school work
Cody isn’t making friends and is feeling left out at school.
Cody gets some baseball advice from Bill who shows him just how to throw a baseball.
Jack breaks up a fight between Cody and another student named Robert. Cody doesn’t like being called an orphan.
Jake and  Sonny are waiting in Jesse’s room to check up on a deal they made prior to Hope Valley.
Lee become a silent partner at Abigail’s which may work for the both of them in the long run.
Cody has a breakdown after breaking a vase Elizabeth received as a house warming gift from Jack.  Jack runs after a tortured Cody. He explains that he understands the hurt and loss he is suffering.
When a wanted poster for Pastor Hogan shows up with the name Matt Landry on Abigails door the women are confused until Jack explains that it is an old poster and that Matt did his time already. Frank Hogan explains his past and how he found the “Good Book” while in prison and longs to lives his life the right way.
Dotty meets with man to discuss her husband’s life insurance policy. He tells her it will take 6-8 months but if she really needs the money now he can offer her a lessor settlement in cash. Fortunately Lee is persuasive and a friend of hers making sure the shady, lying insurance dude pays up.
Jesse rides out to meet the Garrison Gang and discuss Frank’s possibility of being kicked out of town.
Jack and Elizabeth take the students on a camp out. Where they each get to use their skills to calm the fears of their charges for the night before kissing by a campfire.
When Abigail learns that Frank is leaving she heads to the church to give him a good old Abigail speech and tell him that she will stand with him to change the opinion of the town
Elizabeth demands that the Mayor had no right to decide that the town didn’t need to vote in the decision to ask for the resignation of the pastor.
Abigail heads out into the woods to find Frank Hogan and convince him to return to the town, apologize for deceiving them and let them decide as a town if he should leave.
The town accepts the pastor's apology.
And we end with an uninterrupted romantic dinner.
Hooray

That about wraps it up. Our gang is currently happy and all seems well until the next time.