Against the Wild 2: Survive the Serengeti Coming to DIGITAL HD April 29th and DVD May 10th #GIVEAWAY COMING SOON 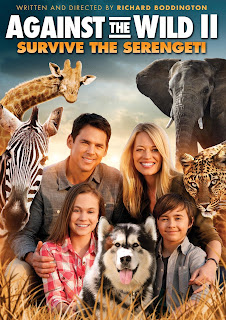 THE FAMILY ADVENTURE OF A LIFETIME

AGAINST THE WILD 2: SURVIVE THE SERENGETI

This Heart pounding Family Movie Debuts on DVD May 10, 2016

BEVERLY HILLS, CA (March xx, 2016) – A heartwarming adventure perfect for families, Against the Wild 2: Survive The Serengeti, arrives on DVD May 10, 2016 from Anchor Bay Entertainment and on Digital HD April 29, 2016.

For bickering siblings Ryan (John Paul Ruttan of Shelby: A Magical Holiday Tail) and Emma (Ella Ballentine of Standoff), it was going to be a fun weekend visit with their dad who is temporarily working in Africa. But when their small plane crash-lands in the Serengeti, they have only each other – along with their fellow passenger, a Malamute named Chinook – to rely on. The rescue teams are searching. Their mom (Jeri Ryan of “Star Trek: Voyager” and “Boston Public”) is panicked. Can brother, sister and one courageous dog now learn how to conquer their fears and trust each other in the most beautiful yet untamed wilderness of all? Ashley Dowds (“Scout’s Safari”) co-stars in this exciting new family adventure from the creator of the original Against the Wild Richard Boddington.

The Dove-family approved film will be available on DVD for the suggested retail price of $19.98 and includes outtakes and interviews from cast members.