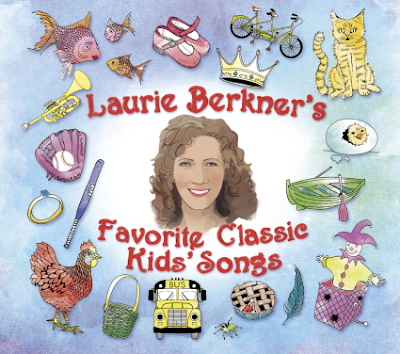 "One of the hippest children's artists ... Berkner's a blast."
-- Family Fun

Says Laurie Berkner, "I grew up with many of these songs, and I'm sure parents and grandparents will remember a lot of them from their own childhoods.  I'm excited about sharing these classics with kids who may not have heard them before and also introducing my versions of songs that might already be family favorites.  In the true folk tradition, I've added some of my own lyrics and my own spin to many of these traditional songs.  I've kept a folk or rock feel for most of the numbers, with a little reggae thrown in here and there for fun!"

While beautifully capturing the up-to-date sound of The Laurie Berkner Band that fans know and love, Laurie Berkner's Favorite Classic Kids' Songs is the only album Laurie has ever released that is comprised almost exclusively of traditional songs.  Highlights include a rollicking "When The Saints Go Marching In," an "Amazing Grace" that achieves its depth of meaning by parsing away the non-essentials, and a funky, hip-hop take on "This Old Man," with additional rhymes penned by Laurie.

Other highlights include a duet performance of "There's A Hole In The Bucket" with Laurie Berkner and Brady Rymer that's filled with spontaneous hijinks, a "Take Me Out To The Ballgame" that hits a home run in the third inning with its swinging jazz style, and "Old King Cole," featuring the fantastic fiddle of Kenny Kosek (Laurie Anderson, Steve Goodman, John Denver, James Taylor, Jerry Garcia), as well as renowned jazz trumpeter Warren Vaché (the Benny Goodman Band, the Concord Super Band, Bucky Pizzarelli, George Wein, Howard Alden).

A former preschool teacher by day and indie rocker by night, Laurie Berkner started marketing her music more than fifteen years ago from her living room on her own label, Two Tomatoes Records.  She is now widely recognized as a pioneer in the "kindie" music genre and was crowned "the undisputed queen of kindie rock" by USA Today.  The Wall Street Journal noted, "Her music is distinctive because it speaks to kids without talking down to them, charming youngsters without boring grown-ups."

Laurie was the first artist to ever appear in music videos on Nick Jr. and was featured in nearly all the episodes of the channel's Jack's Big Music Show (now available on the NOGGIN video subscription app).  She currently stars in the animated musical short-form series Sing it, Laurie! on the Sprout preschool channel, makes regular appearances on Sprout's Sunny Side Up Show, and is a frequent presence on SiriusXM's Kids Place Live channel.

Laurie Berkner's Favorite Classic Kids' Songs will be available wherever favorite albums are sold, at www.laurieberkner.com, and at all digital retailers, including iTunes, Amazon, Google Play, Spotify, and more.  Digital pre-sale starts in iTunes on September 25.

I love Laurie from way back when my babies were watching kid shows and Laurie would come perform in between shows. Her tunes were always catchy and she has a fun way of singing and presenting that you were sucked up into her fun song and eventually singing and dancing along.

On this CD Laurie is singing all the classics from my childhood plus some I have never heard before. In Laurie fashion they are all spot on, peppy, fun, and so kid friendly. I mean who could ignore songs like Bumble Bee Buzz Buzz and We Are Dinosaurs.

This CD is perfect for home or preschools.

Oct. 17 - The Concert Hall at the Society for Ethical Culture - NYC