Stock Up Your Kindle #discountedbooks #freebooks 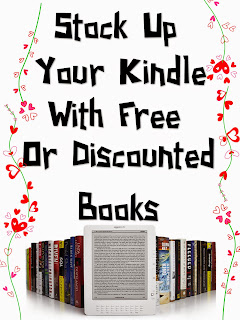 At ten years old, Hadley Dixon's life changed forever. Since those few tragic weeks, she's tried to keep the past buried, but old bones have a way of rising up. Grown now, Hadley can't hide any longer.

Haunted by a boy who never made it home, a woman who sings in moonlight and dances in flames, and the strange, scarred recluse who watches it all from the shadow of the pines, the time has come for Hadley to pay for her sins.

They say the truth will set you free, but sometimes it extracts a terrible price along the way. Is it a price Hadley's willing to pay?

A darkly moving mystery, with a southern Gothic feel, The Grave Tender is the story of a family where no one is what they seem, the women at the heart of that family, and the extraordinary lengths they're willing to go to protect the ones they love.

Arianna Sinclair had led a privileged life, growing up in an elite neighborhood in Marin County, California. Having only known private schools, fancy country clubs and all things luxurious, Arianna had been prepared for everything in life—except hardship.

She’s made the decisions about the direction she wants her life to go, until a surprise encounter with someone from her past challenges everything she believes—and everything that she thinks she needs in order to move on.

A meeting with a stranger, an unexpected journey and a shock that goes to the core of who she is—or who she thinks she is—will demand a reaction. A reaction that will have Arianna laying down the foundation for the rest of her life.

A musical tale of collegiate a cappella filled of high notes, high drama, and high jinks that inspired the hit films Pitch Perfect and Pitch Perfect 2.

Get ready to be pitch slapped.

The roots of unaccompanied vocal music stretch all the way back to Gregorian chants of the Middle Ages, and collegiate a cappella is over a century old. But what was once largely an Ivy League phenomenon has, in the past twenty years, exploded. And it’s not what you think. Though the blue blazers and khakis may remain, a cappella groups at colleges across the country have become downright funky.

In Pitch Perfect, journalist Mickey Rapkin follows a season in a cappella through all its twists and turns, covering the breathtaking displays of vocal talent, the groupies (yes, there are a cappella groupies), the rock-star partying, and all the bitter rivalries. Rapkin brings you into the world of collegiate a cappella characters—from movie-star looks and celebrity-size egos to a troubled new singer with the megawatt voice. Including encounters with a cappella alums like John Legend and Diane Sawyer and fans from Prince to presidents, Rapkin shows that a cappella isn’t for the faint of heart—or lungs.

Sure to strike a chord with fans of Glee and The Sing-Off, this raucous story of a cappella rock stars shows that sometimes, to get that perfect harmony, you have to embrace a little discord.

Contains:
Lost in Distraction - Book 1
Lost For You - Book 2
Lost Without You - Companion Novella

"I highly recommend this book to readers and I give her a full 5 stars! It was entertaining and kept me fully distracted from everything else around me..." - Wolfel's World of Books

“I loved the books plot not only was it filled with suspense and romance, but also some quite shocking revelations that will keep you on the edge of your seat"

"I'm not a huge fan of suspense, but I couldn't pull myself away from this book. It was page after page of deception and unanswered questions. Just when I thought I knew where the story was going another character would burst into the novel and throw everything I thought I knew out the window." - Love Between The Sheets

Gossip says he is hot between the sheets. Has Mr. Insatiable finally met his match?

Enya's been curious about Kit's bedroom exploits ever since his ex-girlfriend spilled the beans about his. . .skill. But he's not for her. Enya can't provide what he wants from life, especially not between the sheets.

After Enya admits she's not good at sex, Kit persuades her to trust in him. Together, they can create fireworks in the bedroom. A few drinks followed by a discussion about kinky sex, and Enya succumbs to his charm.

Thrilled he's been proven correct, Kit can't keep his hands off Enya, and she's unable, and unwilling, to resist him. But is it just great sex. . .or something more?