Why Should Celebrities Be The Only One's Getting Swag??? Get The VIP Treatment For Yourself @TheHollywoodTkt


Celebrities Love The Hollywood Ticket™
Michael Weatherly and James Patterson Among the First in Line to Receive Their Academy Award-Style Swag Bag
Newport, R.I. August, 2014- Michael Weatherly, of NCIS fame and uber-famous author, James Patterson, were among the first celebrities to receive The Hollywood Ticket™ bag, at the Jane Pickens Theater & Event Center in Newport, R.I. this past weekend. The Hollywood Ticket™, an innovative movie ticketing program featuring an Academy Award-style “swag” bag, made its debut exclusively at The Jane Pickens Theater & Event Space, celebrating the opening of Woody Allen’s “Magic in the Moonlight.”
The Hollywood Ticket™ “swag” bag has a retail value of $200 and features celebrity favorite products, samples and offers from such lifestyle brands as EBOOST, a discounted stay and spa credit at Petit St Vincent in the Southern Grenadines, the women's travel guide “Naughty Paris” by former Elle.com Magazine Travel Editor Heather Stimmler-Hall, a plush Medical Monkey, beauty products, chocolate, fashion, jewelry and many hidden surprises from brands whose products have been featured in Hollywood event bags such as the Emmy Awards, Grammy Awards, and MTV Music Awards to name a few.  There’s even a unique offer from a celebrity psychic in honor of Woody Allen’s “Magic in the Moonlight.” 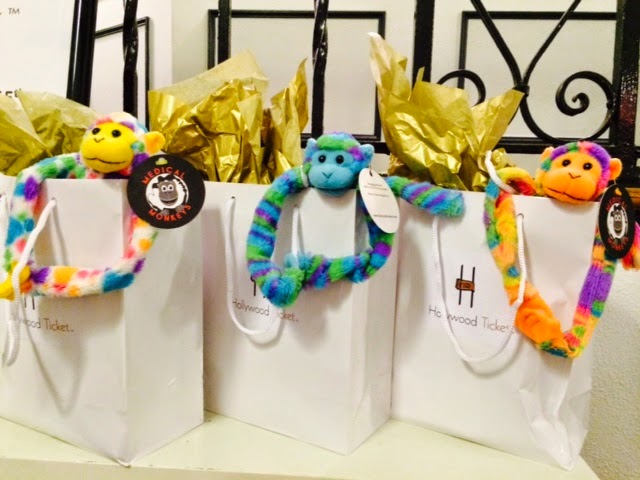 Here is what each of the VIPs and movie-goers received in The Hollywood Ticket™ bag:

·  10% off any stay and $50 spa credit at the ultra-private, luxury resort Petit St. Vincent in the Southern Grenadines.
·  Copy of the travel guide “Naughty Paris” by former Elle.com travel editor Heather Stimmler-Hall
·  A plus Medical Monkey – five different colors were offered and a monkey hung from each Hollywood Ticket™ bag
·  Bottle of illyissimo caffe: mixes of Cappuccino, Frappuccino, and Late Macchiato were given
·  Coupon for $15 to CHOCbite of Beverly Hills where the build-your-own candy bars start at $15.
·  Sample of Yu-Be moisturizer from Japan
·  Sample of COOLA Suncare BB matte tint
·  Sample packet of EBOOST orange and pink lemonade
·  $10 gift certificate towards a C4belt
·  A gift card for a 30% off discount of a website purchase towards Calico June Designs Jewelry
·  Voucher for a complimentary sampler pack of MmmmPop! Popcorn to include Sweet Corn, Caramel Corn, White Cheddar and Kickin’ Key Lime
·  50$ off of a 1 hour session with celebrity psychic, Sheree Silver
·  1.5 oz sample of Luster Now!
·  One bag of Mrs. Thinster’s Cookies- either Chocolate Chip, Brownie Batter or Cake Batter
·  One $2 discount card for the Jane Pickens Cinema Club membership card


It's truly no wonder so many celebrities make their way to so many movie premieres.
About The Hollywood Ticket ™
The Hollywood Ticket™ is a movie ticket or event ticket program consisting of exclusive merchandise and offers for a target audience artfully assembled in an attractive, distinctive bag in celebration of a Hollywood blockbuster movie or event, much like a special “goodie bag” as seen at events such as the Academy Awards.  Entrepreneur and small business owner Paula Conway created The Hollywood Ticket™ so that every movie fan can be a red carpet insider.