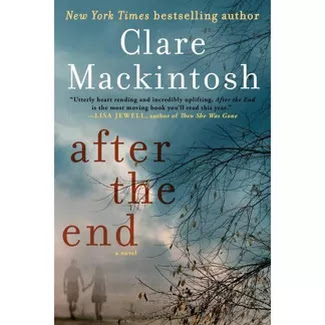 “I devoured this book on a rainy Sunday, and then felt dizzy afterwards—like the book had almost knocked me over . . . it works beautifully.”—Jenny Hollander, Marie Claire

“After the End is a beautifully written novel, compelling and clever, tender and true.

“Mackintosh veers from the thrillers for which she is known into quieter, but no less captivating, territory...[After the End] is tailor-made for book clubs and for fans of Jodi Picoult.”—Publishers Weekly

Max and Pip are the strongest couple you know. They’re best friends, lovers–unshakable. But then their son gets sick and the doctors put the question of his survival into their hands. For the first time, Max and Pip can’t agree. They each want a different future for their son.  What if they could have both?

A gripping and propulsive exploration of love, marriage, parenthood, and the road not taken, AFTER THE END brings one unforgettable family from unimaginable loss to a surprising, satisfying, and redemptive ending and the life they are fated to find. With the emotional power of Jodi Picoult’s My Sister’s Keeper, Mackintosh helps us to see that sometimes the end is just another beginning.