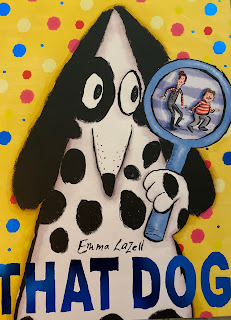 This brilliant second picture book from Emma Lazell--a rising star of the picture-book world--is a hilarious dognapping caper.There's a team of dognappers on the loose! They've stolen lots of pooches, but this time they're up against a very clever dog.The cunning Penelope Dognapper is very keen to get her hands on the latest rare breed, the lesser-spotted woofer. Her big mistake is sending Patrick, her accomplice, to do the job. He has great difficulty identifying the right dog--that dog--and in a house that also contains a snake, a tortoise, and a characterful cat, you can imagine the chaos that ensues as he tries to steal the dog.And that dog is a very smart woofer. He's a bit of a detective in his spare time, and he might just have worked out who's behind the dastardly crimes. Will he avoid getting caught himself and rescue his fellow creatures? 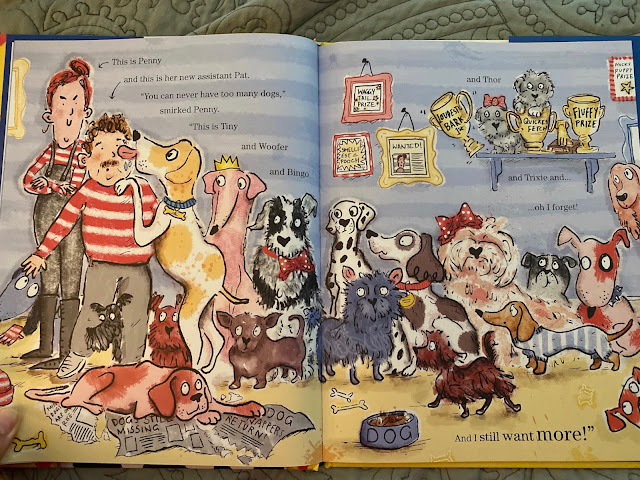 The 411:
This adorably illustrated book about a couple of dog thieves and a very smart dog had me wondering what the message was. When I used to read book to my kids they were more of something I loved doing with them. Now that I am reading to a preschool class I find myself wondering about the bigger message. Will the parents of 10 kids think this is appropriate book for their child is always the question in my head as I select a book.  Yes, I think this is a perfectly appropriate book. 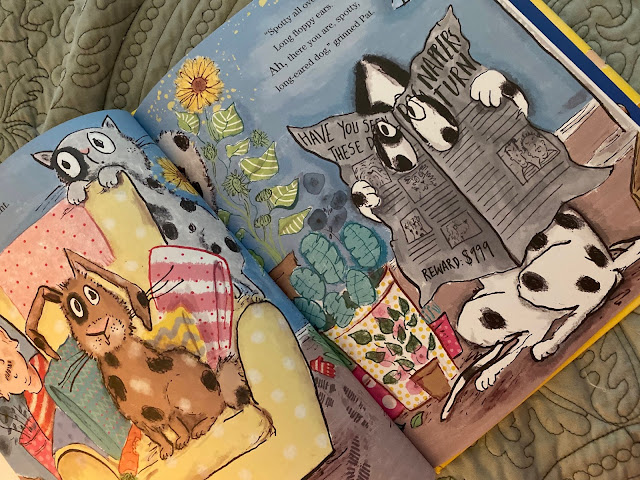 Our antagonist is a very selfish woman named Penny who sends her new assistant Pat out to find a dog she has her eyes on. He is a new dog to the neighborhood and he is unlike all other dogs. He is smart, a problem solver, quick, etc., All the things she wants in a dog. Wanted THIS dog will ultimately be her down fall. This dog is on to her and her assistant isn’t the brightest bulb. She tells him the dog is “spotty all over”. So Pat brings home every spotted thing he finds. A snake, cat, and a rabbit but she is upset and annoyed further every time. She gives him one last warned “for the last time Pat, the dog I’m after is...but the door bell rings so she never finishes. On the next page she yells, “THAT DOG! Or maybe he hells or perhaps the animals she has already stolen yell but yes, standing with that dog are the police. Pat and Penny have their hands up and all the other dogs are wide eyed and watching too. On the next page the animals are wearing party hats and smiling because they have been rescued as the police lead our villains away in hand cuffs. Our dogs and other animals the cat, rabbit and snake are free and being loved by other families and “That Dog” is a hero is written not he cover of the newspaper.
My preschool class will love pointing to all the different dogs and we will discuss being good people and kind to animals. We will discuss not taking things that don’t belong to you. We will also discuss how That Dog was able to lead the police to the dog nappers by following the clues that Pat left behind. THAT IS ONE SMART DOG!
Disclaimer
I received a complimentary product for my honest opinion. No monetary compensation was offered.