Mark Your Calendars: Four Kids And It Available June 30th 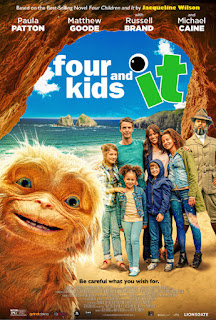 Four Kids and It is a charming and whimsical story featuring a star-studded cast including Paula Patton (2 Guns, Mission Impossible: Ghost Protocol) and Matthew Goode (TV’s “Downton Abbey” and “The Crown”), with Russell Brand (TV’s “Ballers,” Forgetting Sarah Marshall) and the voice of Academy Award

winner Michael Caine (1999, Best Supporting Actor, The Cider House Rules; The Dark Knight franchise, The Prestige). Based on iconic children’s author Jaqueline Wilson’s Four Children and It, the story is a modern twist based on E. Nesbit’s 1902 classic Five Children and It, and also stars Teddie Malleson-Allen, Ashley Aufderheide, Billy Jenkins, and Ellie-Mae Siame. The film adaptation is directed by Andy De Emmony (TV’s “The Nest” and “Spitting Image”) and written by Simon Lewis.

On a seaside holiday, four kids from a blended family visit the beach, where they discover a floppy-eared creature that grants their wishes. But there’s a catch: the kids’ adventures in rock-climbing, pop stardom, and flying end promptly at sunset — leaving them in danger each time. Can they learn to control the magic before something dreadful happens?

On June 30th, Four Kids and It will be available on Digital, Blu-ray, DVD, and On Demand, including major digital platforms including iTunes, Amazon Prime, Vudu, and others.