Warner Bros. Home Entertainment’s Fuller House: The Complete Fourth Season, which will be in stores December 17, 2019.

I Loved Full House and love Fuller House as well. I get a little nostalgic when I see the girls all grown up and raising families of their own.

This is a great gift idea for fans of the show! 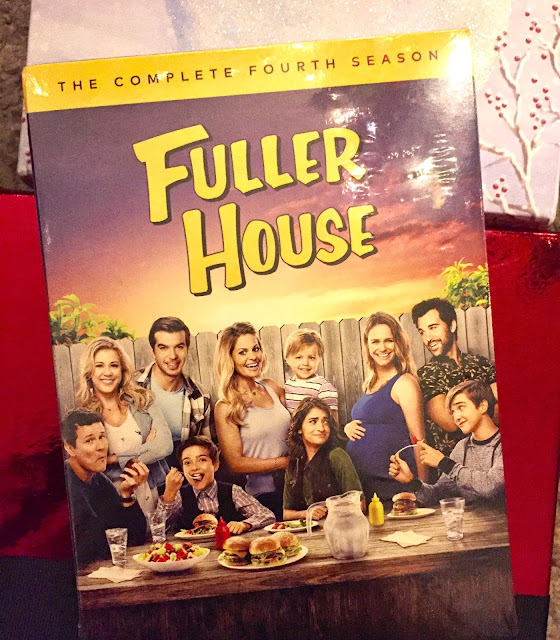 BURBANK, CA (September 4, 2019) – Get ready to enjoy a brand-new set of entertaining adventures from one of television’s favorite families with Warner Bros. Home Entertainment’s release of Fuller House: The Complete Fourth Season, available on DVD December 17, 2019. Join the Tanner clan for 13 new, hilarious and heartwarming episodes, featuring guest appearances by original Full House cast. Fuller House: The Complete Fourth Season will retail for $24.98 SRP ($30.99 in Canada). The fourth season of Fuller House will also be available to own December 17, 2019 on Digital via purchase from digital retailers.

On the fourth season of Fuller House, the Tanners, Fullers and Gibblers are set for more fun adventures and life-changing moments. Steve and D.J. face relationship pressures while they try to recreate the magic they used to have when they were younger. Jackson learns how to drive, begins playing high school sports and attends the prom. Max runs for class president. Kimmy deals with pregnancy cravings and worries her relationship with Stephanie will change once she has Stephanie’s baby. Stephanie questions her ability to be a mom. Danny ponders if retirement was the right call, and Fernando gets a surprise visit from his mother.  It’s an exciting season filled with laughs, surprises and good times that fans won’t want to miss!

The series, which earned a 2018 Primetime Emmy® Award nomination for Outstanding Children’s Program, has been renewed for a fifth and final season on Netflix.

“Since it first premiered, Fuller House has had a devoted fan base, which has made this series a success season after season. Generations of viewers adore the show for its endearing characters, heartwarming storylines and gentle humor. Fuller House is unique because it has the ability to appeal to such a wide range of viewers, everyone from kids to adults,” said Rosemary Markson, WBHE Senior Vice President, TV Marketing. She added, “This is the perfect series for anyone who is searching for a great comedy the whole family can enjoy together.”

Fuller House is the continuation of the ‘90s ABC series Full House in which eldest daughter D.J. Tanner (Candace Cameron Bure, Full House, A Christmas Detour) is now a veterinarian and recently widowed mother trying to raise three boys on her own.  She is joined by her sister Stephanie (Jodie Sweetin, Full House, Walt Before Mickey) and best friend Kimmy Gibbler (Andrea Barber, Full House, The Skateboard Kid 2) and Kimmy’s teenage daughter Ramona (Soni Bringas), who move in to lend their support and help raise D.J.’s kids.  Additional members from the Full House original cast will make guest appearances throughout the series.

The original Full House, which centered around three grown men raising three girls in San Francisco, premiered in 1987 on ABC and became an instant hit with viewers. The family friendly series became a pop culture phenomenon. It was praised by fans for its wholesome comedy, lovable characters and valuable life lessons. It aired for eight successful seasons and later aired in syndication.  Fuller House premiered on Netflix in February 2016.

The fourth season of Fuller House will be available to own on Digital on December 17, 2019. Digital allows consumers to instantly stream and download all episodes to watch anywhere and anytime on their favorite devices. Digital is available from various retailers including Apple TV, Amazon Video, Google Play, Vudu, PlayStation, Xbox and others.