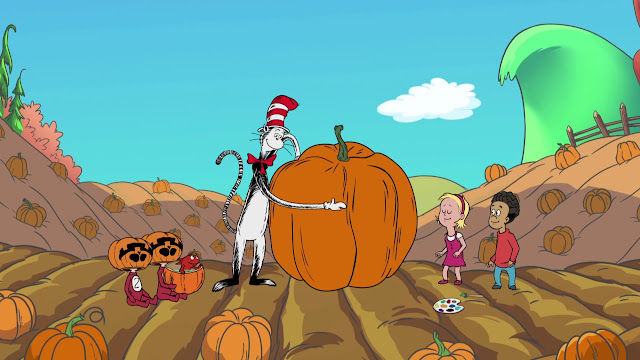 This “Odd-tober” PBS KIDS invites families to celebrate Halloween with spooky episodes of their favorite shows. PBS KIDS will be the go-to destination for Halloween tricks, treats and spooky stories!

On October 31, PBS Kids will air a mini marathon of festive content in the morning and the afternoon:

7 a.m. / 4 p.m. ARTHUR AND THE HAUNTED TREE HOUSE
This Halloween is sure to be the spookiest ever for Arthur and his friends. While trick-or-treating,
Francine meets an old woman with a very mysterious past, while Binky finds himself at Mr. Ratburn’s amazing haunted house (that’s scarier than math class!). Muffy and Bailey decide to cut through a dark, rainy cemetery. And as for Arthur, Buster and Ladonna? Their tree house sleepover seems to be haunted…but by what?

8 a.m. / 3 p.m. WILD KRATTS: Creepy Creatures
The Wild Kratts aren't too sure what to do for Halloween. Should they go trick or treating or just have a Halloween Party? The Kratt bros decide that the best thing to do is to discover some new "creepy cool" creatures. Heading off to find these new animals friends, Martin and Chris don't realize that Zach and the other villains have come up with a plan to ruin Halloween. Can the Wild Kratts defeat the villains and still get to celebrate Halloween? Science Concept: Features that may seem creepy are critical for an animal's survival.

9 a.m. / 2 p.m. CURIOUS GEORGE: A Halloween Boo Fest
It’s George’s first Halloween in the country, and Bill tells him and Allie about the “Legend of No Noggin” – a spooky tale about a hat-kicking scarecrow who haunts the countryside on Halloween. But is the legend real? George and Allie are determined to find out by taking a picture of No Noggin in hat-kicking action. But first, George needs to figure out what he’s going to be for Halloween so he can win the costume contest at the town Boo Festival and give the prize to the Man with the Yellow Hat. Will George be able to put together the perfect costume and find out the truth about No Noggin? Only the curious will find out!

10 a.m. / 1 p.m. CAT IN THE HAT KNOWS A LOT ABOUT HALLOWEEN
The Cat in the Hat takes Nick and Sally on the craziest Halloween ride filled with howlers and shockers and scary fandangles, big laughs and music and fun from all angles! Their fright-filled adventure takes them deep into the Oooky-ma-kooky Closet where Nick and Sally discover the very best Halloween costumes ever!

On pbskids.org, kids can watch Halloween-themed clips and full episodes and can play festive games, including CURIOUS GEORGE’s “Pumpkin Boo.” Halloween videos will also be available on the PBS KIDS Video App and on PBS KIDS on Apple TV, Roku, Amazon Fire and Chromecast.