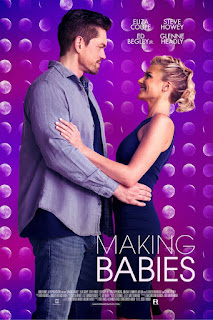 Katie and John Kelly are ready to settle down and have children, but five years later, all they have to show for their efforts is a mountain of negative pregnancy tests. As they run out of traditional options, the couple soon explore the daunting world of medical, spiritual and homeopathic methods to conceive a child

Making Babies starring Steve Howey from Showtimes Shameless was the reason I wanted to see this movie. I love him! He is a humble, adorable actor who is likable even when playing a man desperate to impregnate his wife because she really wants a baby and he would do anything for her.  Eliza Coupe is Katie who is worried that her uterus is going to "shut down like Chernobyl." She is willing to do whatever it takes to have a baby even if that means using all their savings, refraining from intimacy and numerous injections as per her doctor.  John has been trying to make a IPA for his future brewery. None of them are "the one" but it seems like his plans are being put aside while they put all their money into their dreams of a baby.  He is also upset that trying to have a baby means not being intimate with his wife.

As someone who knows couples that went this route to have a baby I completely understand how difficult it can be to want something so bad and the disappointment when it doesn't happen. Watching Katie and John try to go the natural way with pregnancy test after pregnancy test before the movie even started was gut wrenching. I loved how the editing moved us along in the beginning to show how much time has passed. The details of the room changing as Katie takes the test, they wait and she and Steve are disappointed by another negative pregnancy test. 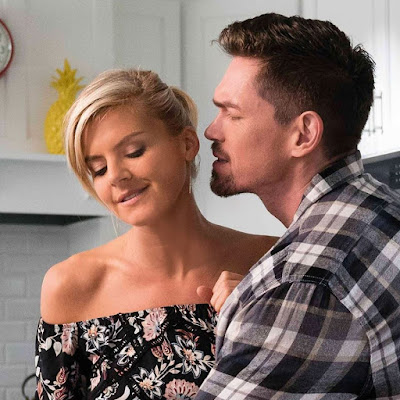 Ed Begley Jr. plays Fertility Doctor Dr. Remis who says as he is about to administer another IVF "I have a great feeling about this."

There are some cringy scenes like a particular scene where they head to a holistic "doctor" who unintentionally give them a tea that contains a hallucination after telling them not to refrain but to "bone it down" UGH!

However I thought the movie was cute. I enjoyed watching Katie try to turn John on during a sperm collection by talking like a Leprechaun (how the hell did he finish LOL?) and how Katie and John finally handle their problems. John reminded me a lot of Steve Howey's character Steve Ball from Shameless. He will do whatever he can for the people he cares about.  Maybe this movie won't work for everyone (my husband did not enjoy it) but I thought it was worth a watch and would watch it again.

In the end, this movie is a love story about two people who desperately want a child.

The movie is available on Demand, on Amazon VOD, Fandango, iTunes and more.