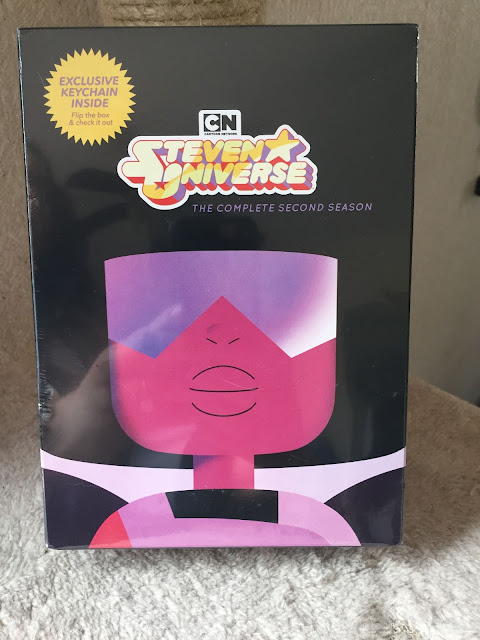 My daughter LOVES Steven Universe and watched it all the time. We watched all 23 episodes of this DVD in one day. I had vertigo and an inner ear issue so took the day off work and she asked if I wanted her to stay with me. I was so dizzy, nervous and nauseous that I immediately said yes. She and I watched it while I recovered at home, in front of my son's school while we waited to pick him up and finished up when we got home. It was a Steven and the Gems marathon and I was so excited to watch with her. These are episodes she knows and loves but they were all new to me. Every time I had a question, she had an answer for me.

These episodes originally aired March 2015- January 2016 and include:

Full Disclosure
Joy Ride
Say Uncle - I love the crossover of Uncle Grandpa. That was another favorite
Love Letters
Reformed
Sworn to the Sword Reformed
Sworn to the Sword
Riding Tides, Crashing Skies, Sworn to the Sword
Keeping it Together
We Need To Talk
Chille Tid
Cry for Help
Keystone Motel
Onion Friend
Historical Fiction
Friend Ship
Nightmare Hospital
Catch and Release
When It Rains
Back to the Barn
Sadie's Song
To Far
The Answer
Steven's Birthday
It Could Have Been Great
Message Received
Log Date 7 15 2

We are a little obsessed with Steven, The Gems and all the other far out characters like Onion. We love the theme song and the closing song and have sang them for years so we were excited to know that there is also a Steven Universe Season 2 Soundtrack and Karaoke also available for digital download and streaming. Check out Sadie Killer and the Suspects. We can't get it out of our head.

AND one of the best parts of the DVD Box Set is that it comes with an exclusive fusion key chain featuring Garnet.